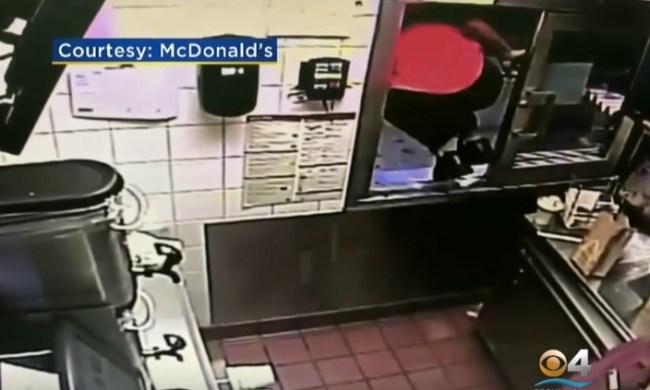 A McDonald’s drive-thru employee in the Miami-Dade area is being heralded as a hero for saving the life of an off-duty police officer. 22-year-old Pedro Viloria was working the drive-thru when the off-duty officer came through with her two children. Pedro realized something was very, VERY wrong when the car began to roll away and the kids were screaming.

Quick on his feet, Pedro Viloria never panicked. Instead, he jumped through the drive-through window, stopped the car, and pulled the off-duty police officer from her vehicle and summoned emergency medical help as the woman was suffering an unspecified medical emergency.

When he was asked about why he was so quick to act in this emergency situation, Pedro gave the best answer ever: “I thought if these kids lose their mother today, that’s gonna be tragic. It is what a hero does, if I would’ve need to die to save that woman, I would’ve done it.”

The off-duty officer is listed as being in critical condition according to WSVN, and she’s being treated at Kendall Regional Hospital.

For all of the shit Fast Food empires take, I feel like more often than not when McDonald’s is in the news it’s always good news. Well, aside from yesterday’s little snafu on Twitter where McDonald’s claims they were supposedly ‘hacked’ and someone tweeted an insult from the McDonald’s corporate account at President Donald Trump. The Twitter reactions to that tweet that was deleted almost immediately are pretty perfect.