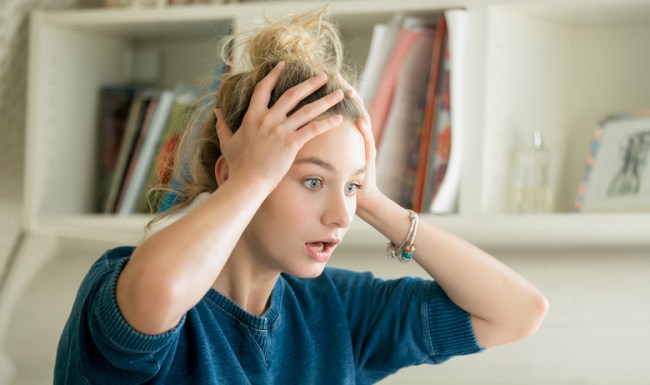 As we have well chronicled here, the dating world is a complete minefield to try to navigate these days. Mostly that’s just because people, for the most part, kind of suck.

Every now and then though you think you’ve found a diamond in the rough, however. Problem is, sometimes these gems are really good at hiding their flaws. Flaws like the fact that they are, well, idiots.

The thing is, I’ve run into a few idiots in my day, but rarely did these folks reach the levels of idiocy presented in a recent Reddit thread which asked, “At what moment did you realize you were dating an idiot?”

These people are truly “special.”

When he blamed the loan company.

I said I had $20,000 in student loan debt. He said he had something like $20,000, too. He then changed his answer to $40,000. Then thought about it and didn’t know. I pressured him to actually figure it out…. turns out, he owed $120,000 in student loans. He blamed the loan company for not telling him how much he was taking out. He blamed them for making him pay it all back. I pointed out that the information was on the forms he signed every year. He said that it was unrealistic for them to make him read all of that information.

My favorite part is that his degree is in communication. ~ LifeIsShortAndSoAmI

He looked out the car window to check his parking job, then closed it on his own head. ~ stay_bronze_horseman

She thought Al-Qaeda is a country. She actually expressed interest in visiting it someday. ~ regalternative

When i had to explain that you spray mosquito repellent on YOURSELF, not in the air at the mosquitos.

For the third time.

It’s not like wasp spray. Stop fucking wasting it. ~ birdbrainiac

Every time I went to her house, there was small brown/melted “V” shapes in the carpet. I always wondered what they were..

Then one day, I went over one time and saw her hair straightener lying on the carpet. She left it on ALL THE FUCKING TIME, and would just go to work. Like.. how have you not burned your apartment complex down yet? ~ Doebino

He tried to tell me that an oxymoron was a cleaning solution. ~ Lyd_Euh

Picture this, High School 1980ish. Boyfriend and i went to see Friday the 13th movie and I would hide my eyes when the scary music started. Turns out I am not a fan of horror for sake of blood. After the movie my boyfriend was pissed at me and accused me of seeing the movie before. He thought that that was why I knew something scary was coming up. It couldn’t have been the formula scary music. Lol. That moment I decided to go to college and not marry my high school sweetheart. ~ Tess47

I had this one ex boyfriend who would play Russian music fairly loud in the car. One day I asked him why and with a straight face he said “It’s to scare away the black people.” ~ Beholdthebooty

There are so many, but two of my favorites:

1) He was adamant that ‘night owl’ meant whore and that I should NEVER again refer to myself as one because that was equivalent with claiming that I was a prostitute. I could not convince him that he misunderstood and that ‘lady of the night’ was the term he was searching for.

2) He was 100% sure that German was a romance language and argued this point vehemently in spite of the presentation of vast evidence to the contrary. ~ AfterElysium

She (perhaps unsurprisingly to the rest of us) responded with “I thought you were sick?” Hearing him try to come up with a story in which he was sick AND also had a broken down car was simply hilarious. ~ Mrs_Enid_Kapelsen

When she told me that the wind comes from trees.

You know, because they wave around, and that pushes the air around, making wind.

No, she was not joking.

Edit: I’m so pleased that my far-and-away top rated comment of all time is about how stupid my ex-wife is. Screw that bitch. ~ TheAbyssGazesAlso

When I was 19 I briefly dated a guy who wanted to get married and talked about it early on, so it felt very serious. One day we met up to study together and he made a comment about how disgusting he found gay people to be and it really bothered me. I didn’t know what I say so I sat quietly for a long time as he talked and a million things went through my mind. He started to sense that I was upset so he leaned in and quietly asked me if I was “one of those black girls who pretends to be nice and sweet at first but is actually just angry and mad a lot?” Being the type of person I am/was, I said no and he said “good” and went to class. I stopped answering his phone calls/texts and spoke to him only one time after that. He was a special kind of idiot. ~ TheTulipWars

This was on Valentine’s Day. ~ jesskay888

I was a vegetarian when we were dating. Pretty early on he asked if I ate fish. I said no, I don’t eat any animals. To which he replied “a fish isn’t an animal, it’s a mammal”. I didn’t even know what to say, I just walked out of the room. ~ livercookies

He thought procrastination meant overthinking. Disillusioned meant one didn’t have enough light to see. Disenchanted meant one had stopped chanting.

The list goes on and on. The funniest part is he couldn’t understand why we had so much miscommunication.

My ex boyfriend saw a very large lady wearing double denim, then turned to me and said “wow, how many cows died for her outfit?!” At first I laughed then realised he wasn’t really joking and after probing, genuinely believed that denim came from cows. It was the beginning of the end really… ~ braithgwirod

When he nodded and said yes as the moving van rental guy explained the height of the truck and what clearance was needed… then half an hour later, he drove it into the parking garage at our apartment complex and ran it into a low beam, smashing the top of the truck.

Then he claimed he hadn’t been warned about low clearances and I was making up/imagining the entire prior conversation.

Then he drove said moving truck at 80 mph on a speed-trapped highway. Trooper ticketed him, said he wasn’t ticketing me because I really had no choice but to try to keep up with that idiot.

He took me out to my favorite restaurant, a chic little upscale cafe, for dinner on Valentine’s Day and made fun of the way I pronounced filet. He tried to get the waiter on his side. “Can you believe this? Hahaha! She wants the ‘fill-ayyyy!” Then he leans upwards conspiratorially, “she means the fillit, obviously. Hahaha!”

Then he wouldn’t shut up about it. I was like, “it’s French, the -et sound is pronounced ‘ay'” but he wasn’t having it. Kept going on and on about how stupid I must be until he dropped me off at home. I told him we were done the next day. ~ sweetrhymepurereason

And I think we have a winner…

Check the rest of the responses out over at Reddit, and then quietly weep for humanity.