No, JNCO Jeans Are Not Making A Comeback 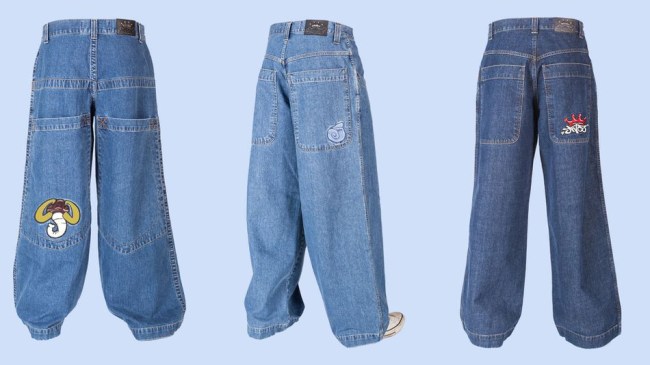 I’m pretty nostalgic about my childhood. I had a great childhood. I got to see Jordan dominate with the Bulls for two three-peats. I got to watch Nickelodeon in its prime, complete with the G.O.A.T. of all line-ups: Hey Arnold, Doug, Rocko’s Modern Life, Salute Your Shorts, Pete & Pete, etc. I dabbled with Pogs. I had AIM for chattin’ it up with girls and a Discman that I wore out Third-Eye Blind and Sublime’s self-titled albums. GoldenEye 64 tournaments were a regular occurrence in my neighborhood. Some afternoons I tried calling in to TLR, only to get that annoying MTV busy signal. It was a great time to come of age.

The one thing I don’t miss is the late ’90s middle school JNCO Jeans craze. Those garish, expensive-as-hell jeans made your legs look like a double-wide trailer. The baggy pockets served no practical purpose unless you’re the type of sick human being who stuffs toasted Quiznos sandwiches in your pants. And the embroidered faux-graffiti JNCO logos are tacky as hell.

They’re an abomination to any sort of fashion sense that would ever get a normal human laid. Anyone who thinks they’re cool, even nostalgically, in 2017 probably listens to a worn-out bootleg recording of a 2003 3 Doors Down performance at the Nissan Pavilion in their Geo Metro. In short: 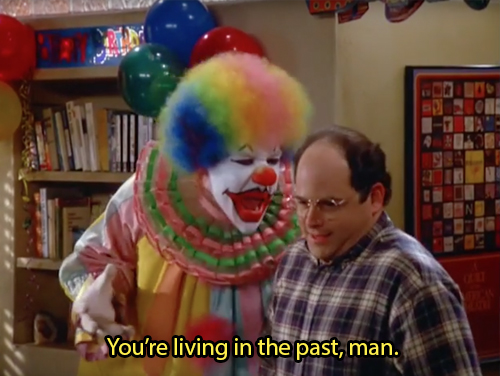 In an era of hyper-’90s child nostalgia profiteering (sup, Ford Bronco and Kel Mitchell),  I’m not nostalgic for JNCO Jeans.  At all. Two years ago the company tried to re-ride the wave of the “JNCOS ARE MAKING A COMEBACK!” and, for a hot second, we got excited about it. Today they’re still trying to capitalize on us ’90s kids, capturing the attention of the style arbiters at Gentlemen’s Quarterly magazine:

Could you actually picture someone wearing those and taking themselves seriously in 2017? That’s high comedy. Even as a gag gift.

Cited by GQ is a tweet from JNCO declaring that “Old School JNCOs are back!” What JNCO doesn’t seem to understand is that you can’t declare yourself as “back” unless you’re post-2007 Britney Spears or Dave Chappelle.

JNCO peeps, you're in for a treat! Old school JNCOs are back! We've added 40" Mammoth jeans. Shop this favorite now: https://t.co/O5HDaA2Znh pic.twitter.com/syMqUfL5lD

The best part about clicking on that link, however, is how GQ literally just baited us ’90s idiots right in. When you read the copy, GQ pulls the old editorial bait-and-switch and uses said hook about the JNCO comeback to get you to buy some *much less obnoxious* wide jeans. That’s strategic AF:

What separates JNCOs from the modern wave of oversized pants is in the obvious (these pants are freakin’ enormous) and in the details. These jeans flare out at the bottom (which only in the rarest of cases, like a full Gucci look, can look cool) and the wash is a mom jean-ish nightmare. So, it should go without saying, but please do not buy these. Instead, if you want to actually get in one the wider leg trouser game, know the best place to start is by buying a pair from a trusted designer of said style and to pair them with the simplest, best-fitting gear you own—like white tennis sneakers, a plain white shirt, and a crewneck sweater.

Coed Naked t-shirts, however, can come back any day now.

No they’re not. Stop it. https://t.co/wjvGLhKj6g