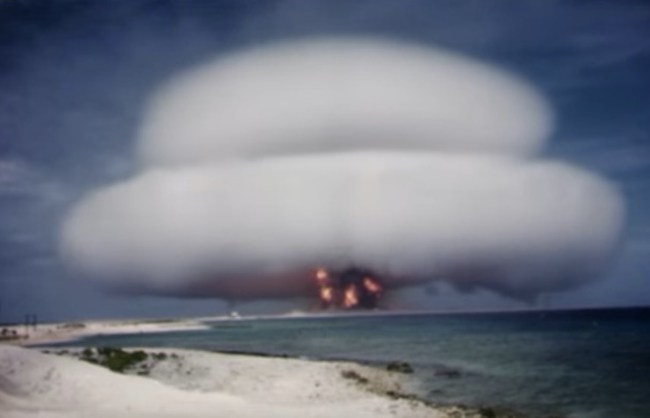 Atmospheric nuclear tests are the ones you think of when conjuring up images of a nuclear bomb explosion. They’re the explosions with the big ass mushroom clouds often seen in movies and on TV. Between the year 1945 and 1962, the United States government conducted a total of 210 of these atmospheric nuclear bomb tests, and each of the tests was filmed and stored away for record keeping.

Why did these tests end in 1962? Well, that’s when above ground testing was outlawed for nuclear bombs. So, for the past half century, thousands of videos of nuclear bomb tests have just been wasting away in a vault somewhere in federal government storage…until now.

Weapons physicist Greg Spriggs, with the Lawrence Livermore National Laboratory, has for the past five years been attempting to preserve the 7,000 known nuclear bomb test videos in existence, and recently he’s uploaded a massive cache of these now-declassified videos to YouTube. So, for the first time ever you can now watch these insane nuclear bomb tests for yourself on YouTube.

To hear him talk about what it’s like unearthing these previously stored away and classified videos is pretty spectacular. Here’s a playlist of all these declassified nuclear bomb videos, and below I’ve included a few choice videos from within the playlist:

Here are some of those videos broken out individually:

Big shout out to Gizmodo for sharing the news of these videos hitting YouTube!!!