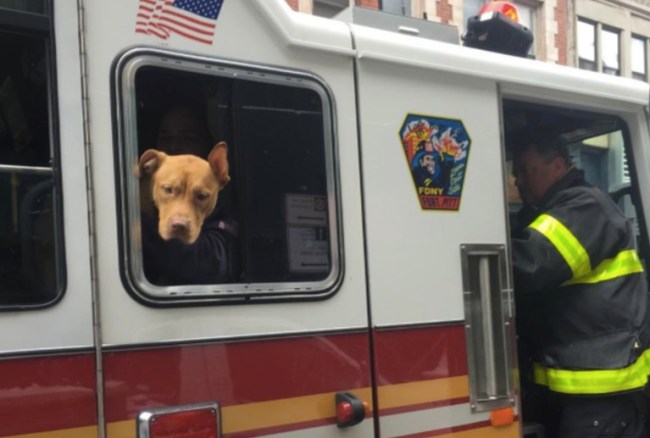 Ashley is a good dog. She’s currently an FDNY firehouse dog at a Lower East Side precinct known as ‘Fort Pitt’ and has the love and adoration of an entire fire department. Life wasn’t always so good for Ashley the Pit Bull, though, because it wasn’t that long ago that Ashley was abandoned in an actual crack house.

Once left without food, water, and heat/electricity for over two days, Ashley the Pit Bull was malnourished and covered in cigarette burns when Erica Mahnken and her fiancé rescued the dog from an empty crack house on Staten Island. Ashley the Pit Bull was taken in by No More Pain Rescue where she was nursed back to health and made a remarkable recovery. Ashley was taken in by No More Pain Rescue over a year ago but it wasn’t until January 9th of this year when this adorable Pit Bull found her ‘forever home’ on the Lower East Side, and her ‘Forever Family’ in the form an entire FDNY firehouse.

The FDNY bros at ‘Fort Pitt’ used to have a rottweiler in the firehouse and agreed to take in Ashley for foster care, but after just a few days they realized they were in love with the dog and she’d be staying with them forever.

Three days later, they called up Mahnken and asked if they could adopt the nearly year-old pit bull. Of course, Mahnken said, “Yes!”
“My heart wants to explode,” Mahnken said. “Everyone’s so quick to judge a dog, especially a dog you don’t know where it came from or what kind of person they are and what kind… It is very satisfying.”
The “Fort Pitt” firefighters also seem to be enjoying their new official firehouse dog named Ashley, “Ash” for short.
The dog loves to hang out with the crew in the kitchen and goes on ride-alongs with the firefighters when they respond to a fire. She even has her own little spot on the fire truck, Mahnken added. via CBS News

It’s cool if you’re getting a little choked up, you’re not alone.

Ashley the Pit Bull’s story is probably the most feel-good story I’ve come across so far in 2017, and there are a bunch of happy details I left out here from the CBS News story. So, if you want to keep on reading about this amazing pup’s road to recover just CLICK HERE to head on over to CBS News and keep on reading!