Sharknado Is REAL! And It Happened In Australia 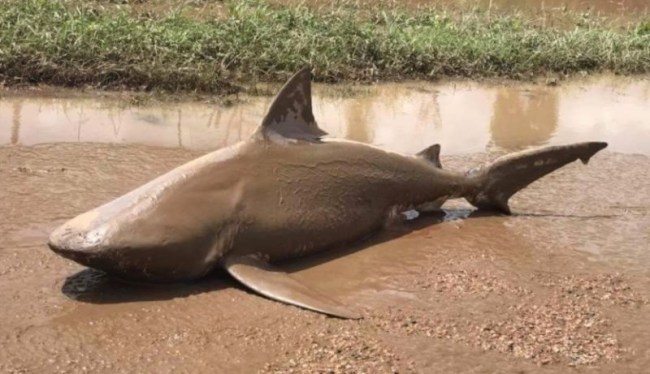 As if Australia wasn’t scary AF already with their bloodthirsty koalas and crocodile-devouring pythons and crazy spider infestations. Now they have fucking SHARKNADOES!!!

Southeast Queensland, Australia is currently being ravaged by Cyclone Debbie, which has knocked out power, caused flooding, and impromptu surfing and jet skiing in raging rivers. The violent tropical storm featured 15-inches of rain and strong winds of 160 MPH. The cyclone’s floodwaters even washed up a 5-foot shark pretty far inland, which caused many to make comparisons to the 2013 SyFy classic film “Sharknado.”

Queensland Fire and Emergency Services shared photos of the bull shark, which was found in a puddle.

Think it's safe to go back in the water? Think again! A bull shark washed up in Ayr. Stay out of floodwater. #TCDebbie #ifitsfloodedforgetit pic.twitter.com/DpP29Va1JG

The shark was pushed from the ocean and deposited in the town of Ayr, just north of where Cylcone Debbie made landfall.

So this was a Sharklone? I wouldn’t doubt that SyFy is trying to get the copyright for the word “Sharkclone” right now.