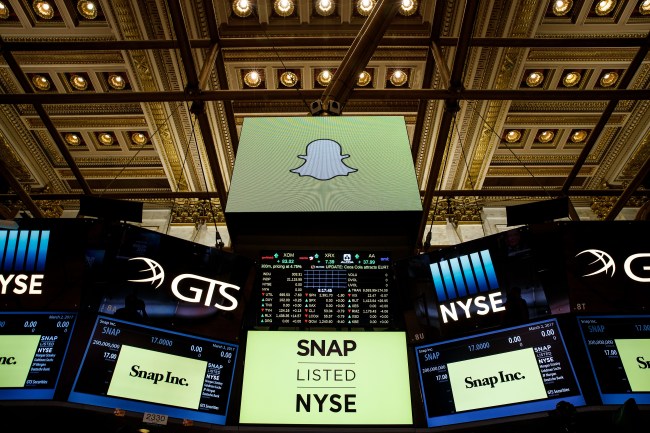 Snapchat had a DAY yesterday. The company that started off as a mechanism for your dick pics to go untraced went public yesterday, with stock prices closing at $24.48 per share–a mind-numbing 44 percent higher than initial expectations and the highest valuation of a US tech company since Facebook in 2012.

Evan Spiegel, the 26-year-old co-founder of Snapchat, is set to become the world’s youngest self-made billionaire on an idea that initially started as a class project at Stanford. In 2013, Spiegel turned down a $3 billion cash acquisition from Facebook that would have pocketed him personally $750 million dollars. Today, Spiegel’s net worth could hover around $5.5 billion.

Snapchat’s IPO made yesterday a good day for many other investors, including a high school in Mountain View, California  that invested $15,000 in the tech company just four years ago.

Saint Francis High School was one of the first investors in the company after they infused a small percentage of its endowment money in Snapchat in Snap Inc’s seed round of financing in 2012, according to CNBC.

The private Catholic high school whose tuition is $17,000 per year sold 1.4 million shares,  two thirds of its overall stake, for $17 per share at Thursday’s IPO. The school has yet to confirm the exact return on their investment, by officials cited by NBC estimate it to be a $24 million haul.

The school first got involved with Snapchat in 2012 after a parent of two Saint Francis High School students noticed his children’s obsession with the app. That parent also happened to be Barry Eggers, the founding partner of venture capital firm Lightspeed Venture Partners.

After meeting with Snap co-founders Evan Spiegal and Bobby Murphy, Eggers was sold. His VC firm infused a $500,000 investment round, the company’s first. Lightspeed invested $485,000 and Eggers invited Saint Francis’ to throw down the remaining $15,000 from its investment fund, proving very very beneficial for both parties.

Lightspeed Venture Partners stake is now valued at over $1 billion.