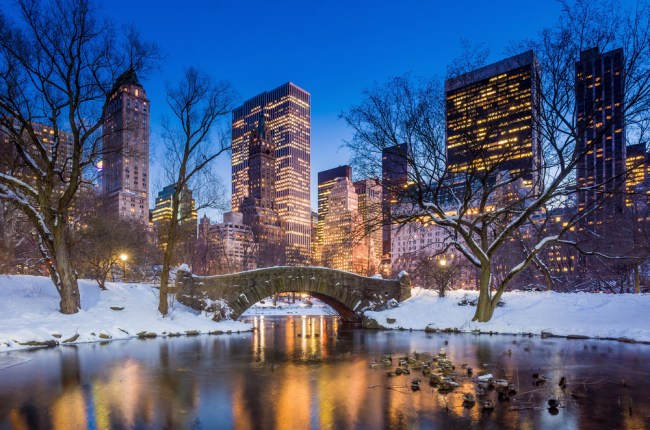 Taking a selfie is always a bad idea, and there’s no such thing as a ‘good selfie’. At best, when taking a selfie you’re going to look like a complete dickhead, at worst, though, you can potentially get yourself killed.

Case in point is this group of teenagers who nearly died in NYC‘s Central Park in search of the ultimate selfie. The 7 teens plunged through an ice-covered pond in Central Park near 59th and 5th Ave after venturing out onto the ice to take a selfie. They had to be rescued by good samaritans who put their lives at risk to save these boys who were said to be panicking, drowning, and clawing at each other in confusion.

At least three good Samaritans jumped into the glacial water to help the frightened kids — who were panicking and grabbing at each other, according to witnesses.
Reykwon Martinez, 15, of Brooklyn, and his cousin were on their way to the basketball court when he saw the teens disappear into the frigid waters known simply as The Pond.
“Me and my cousin hopped the gate to try and help … Everybody was screaming and yelling,” said Martinez, who was treated at Bellevue Hospital and released Monday night.
“We were in the middle of the water and everyone was pulling each other down … I was trying to swim out of there … I couldn’t breathe,” said the shaken teen, who realized he had gone from rescuer to victim.
As firefighters and cops arrived at 5:47 p.m., Martinez had just been pulled to safety by a man on the bank. He watched first responders treat a teen who appeared to be foaming at the mouth. (via NYDN)

UPDATE: The five kids were rescued after falling through ice on a Central Park pond in search of a good selfie https://t.co/eLtfhdfkKN pic.twitter.com/q8178EhFnF

A passerby stated that the group of teens was taking a selfie when the ice cracked and they all plunged into the frigid water together. That’s when the panic struck. The unexpected shock of falling into ice-cold water is enough to cause anyone to lose their mind, and when you’ve got a group of people panicking it becomes an absolute worse case scenario for survival. Thankfully, there were some passersby willing to lay their lives on the line to save these kids.