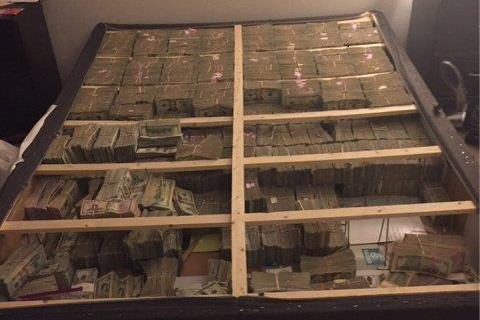 Wild picture from the U.S. Attorney’s office in Boston. While investigating a massive fraud case tied to the internet phone service TelexFree Inc., officials discovered a box spring with $20 million in cash stuffed inside of it. Here’s what all that loot looks like stuffed under the bed:

The cash belongs to a Brazilian national named Cleber Rene Rizerio Rocha, who the feds have nabbed for money laundering in connection with the fraud case. via the New York Post:

The image stems from a search conducted Jan. 4 inside the Westborough, Mass., apartment of Cleber Rene Rizerio Rocha, who was charged in a criminal complaint with one count of conspiring to commit money-laundering in connection with the alleged pyramid scheme involving TelexFree.

According to the complaint, the internet phone service company ripped off about half of their participants, or roughly 1 million people across the world.

“Later that day, Carlos Wanzeler, one of the founders of the company, allegedly fled to Brazil, his native country, where he has remained,” prosecutors said. “Wanzeler and TelexFree co-founder James Merrill were indicted in July 2014 on charges that they operated TelexFree as a massive pyramid scheme. Merrill pleaded guilty to those charges in October 2016 and is awaiting sentencing.”

According to The Post, Rocha is facing up to 20 years in prison.