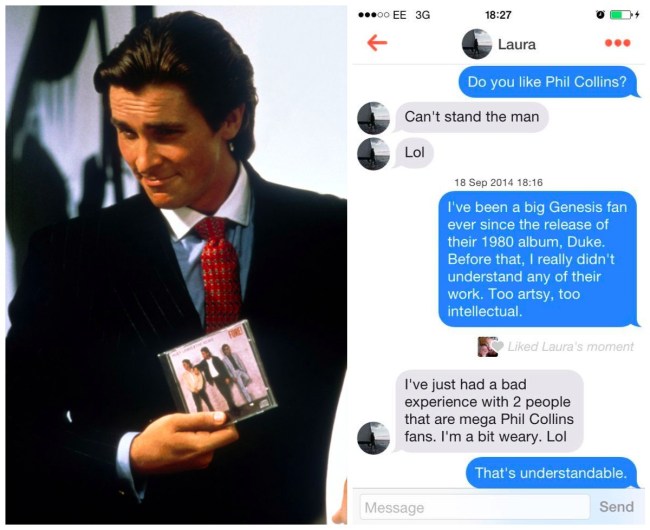 A couple years ago we posted a story about a dude on Tinder who casually dropped Patrick Bateman/American Psycho lines to girls on Tinder. That’s all I can think about in this incredible TIFU story. I know it makes absolutely zero sense for American Psycho to ever have a sequel as the first movie was pretty much a masterpiece, but damn that would be awesome to see Bateman in the Tinder era.

Anyway, this Bro on Reddit got in some trouble when he said he sarcastically said he was a psycho killer on a first Tinder date.

So because of circumstances beyond my control this didn’t happen today.

Cue my first date with a girl I met on Tinder, we meet up at a restaurant and get to talking. This are going great, she thinks I’m funnier in person (when does that ever happen?!), she actually invites me to the mall to hangout more with some of her friends when dinner is over.

So after the food arrives the conversation turns a little more towards how we met (pay close attention and you will spot my mistake). She states she’s glad I’m normal and not some sort of serial killer.

Now I could have just laughed… I could have but I was funny remember? I replied with “Oh thanks for thinking I’m normal! But I actually am a serial killer, bodies for days buried out at the farm.”

She laughed, I laughed, I thought I did great at making it sound sarcastic.

She excuses herself to the bathroom to do whatever girls do in bathrooms on dates. It was taking a questionably long time for her to return and I was slightly worried she bailed and stuck me with the bill, my luck right? Wrong.

So unbelievably wrong, my luck was worse as police officers suddenly appear out of nowhere and tell me to keep both of my hands visible on the table.

At this point I’m confused, this must be a joke. I see my date coming with a staff member and get ready for Ashton Kutcher to appear, no such luck.

The police ask if it’s me and she says ya, the cops get me to stand up and handcuff me and walk me out, not a single person seems to want to answer any of my questions.

I’m in the car and the police are outside talking to my date for a few minutes when they get into the car with me and ask me if I told my date I was a serial killer, areyoufuckingkiddingme…

I tell them yes but I was joking.

LPT: Don’t admit to police you told someone you were a serial killer.

I guess eventually they either believed me or got tired of hearing me speak much to my lawyers disapproval (to me speaking) and let me go and reminded me that my jokes suck.

I’m not sure how date number two will go but I’m excited to find out, also a bright side is that I have no idea who paid for my food.

TL:DR: I made a joke I was a serial killer, date doesn’t get sarcasm, I spend hours in the police station.

And hey, speaking of Bateman — Here’s what Bret Easton Ellis said he’d probably be doing now a few years ago.

So what would I tell fans who ask me where Patrick Bateman would be now, as if he were actually alive, tactile, wandering through our world in flesh and blood? For a while during the mid- to late ’90s—at the height of the dotcom bubble, when Manhattan seemed even more absurdly decadent than it did in 1987, before Black Monday—it was a possibility that Bateman, if the book had been moved up a decade, would have been the founder of a number of dotcoms. He would have partied in Tribeca and the Hamptons, indistinguishable from the young and handsome boy wonders who were populating the scene then, with their millions of nonexistent dollars, dancing unknowingly on the edge of an implosion that happened mercilessly, wiping out the playing field, correcting scores.

Maybe Easton Ellis will write an American Psycho where Bateman had a kid that he didn’t know about who follows in his dad’s footsteps. That’d be such an insane premise to the Bateman family saga.