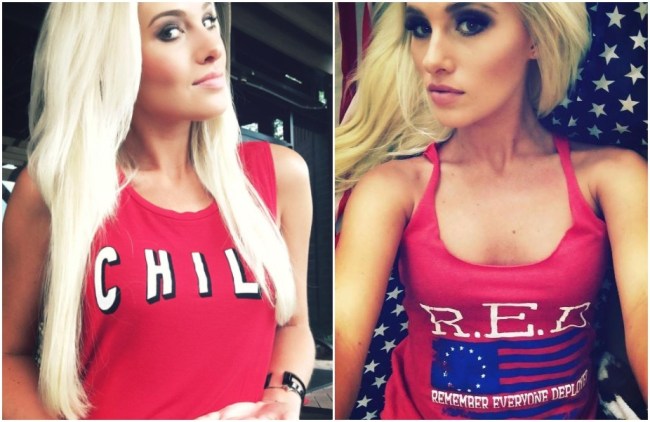 Well, well, well…. The Tomi Lahren vs. Glenn Beck media drama just got wayyyy more interesting this afternoon. Last Friday the 24-year-old talking head filed a lawsuit in Texas District Court alleging that her termination from The Blaze was a violation of her First Amendment rights. The Blaze produced and owned all her content on her Facebook page. As you’ll recall, The Blaze principle Glenn Beck canned her after her pro-choice comments on The View went viral.

There’s been A LOT of media drama since then, as Lahren — the Facebook conductor of the Trump Train — is easily one of the stand-out media voices of young, modern conservatism. Last week she was on ABC’s Nightline talking about having her voice cut-off by her employer, which prompted a clap-back from The Blaze:

“Something has been stripped by me, and that’s my ability to work,” Ms. Lahren said. “That’s my ability to have a voice. That’s my ability to communicate with those fans and those followers that I have organically built for myself. And that’s been taken from me wrongfully. I’m upset by it, I’m hurt by it, and I feel betrayed by it. But at the end of the day, I’m going to come out of this stronger, because I’m not the kind of girl that sits in the corner and cries about things.”

Ms. Lahren’s show “Tomi” was taken off the air and she was denied access to her Facebook page after she told a panel on “The View” that she would be a “hypocrite” if she adopted a pro-life stance while calling herself an advocate of limited government.

“I just want to work and have the freedom to put my voice out there and I want to interact with my fans and my followers,” Ms. Lahren added. “That’s all I want out of this.”

The Blaze issued the following statement to the Dallas Morning News about her lawsuit: “It is puzzling that an employee who remains under contract (and is still being paid) has sued us for being fired, especially when we continue to comply fully with the terms of our agreement with her.”

Now a legal clap-back is happening in court, with Glenn Beck filing a counter lawsuit today. He claims the reasons for her dismissal is because of her “inappropriate and unprofessional” behavior and costing the company money. via Raw Story:

Beck’s suit states, Lahren constantly complained about lighting, room temperature, editing, shooting and directing and that she made public appearances without prior approval.

The suit also alleges, “Lahren turned down a number of advertisers on Blaze for unexplained reasons, limiting any chance for TheBlaze to recoup its investment into her and her show.”

Turning down money? That’s not going to win her any sympathy in the eyes of future employers, especially in an industry with as slim of margins as media.

That said, offer from BroBible still stands, Tomi… We’re pretty excited to be at your table for the White House Correspondents dinner later this year.

Meanwhile, as of an hour ago, Tomi Lahren is pledging to still be “crashing safe spaces” at ECU tonight, complete with a Netflix and Chill shirt.