NASCAR’s Brad Keselowski On Squandering A Golden Opportunity To Invest Early In Tesla: ‘One Of My All-Time Dumb Moves’ 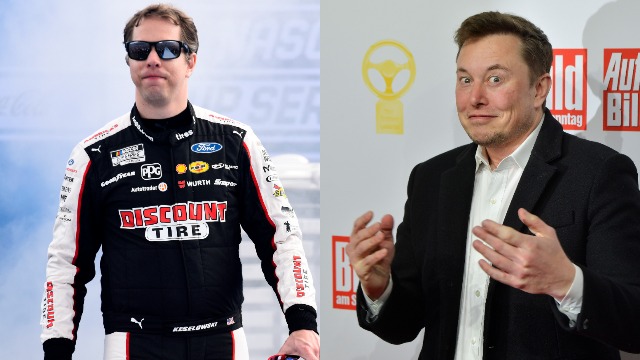 The Team Penske driver is the second of just four drivers to win a title in both the Cup Series and the Xfinity Series, founder of 3-D printing company Keselowski Advanced Manufacturing that specializes in space rocket parts, and most importantly, made an important cameo in the critically-acclaimed film Sharknado 3: Oh Hell No!

He will be okay, even after letting a silver-plated opportunity to become Big Rich find the bottom of a trash can a decade ago.

Keselowski appeared on our Endless Hustle podcast to discuss buying Tesla “before it was cool” in 2009, fresh off his first driver contract, when Tesla had released just 147 Roadsters and was on the cusp of receiving a $465 million loan from the U.S. Department of Energy.

NASCAR champ @keselowski bought a Tesla before it was cool & was rewarded with an opportunity to get in early on the IPO. That opportunity was squandered.

"One of my all-time dumb moves."

“I wanted something nobody else had. And I heard about this electric car company in 2009 called Tesla. I happened to be going to California for a race and they had one dealership in 2009 and it was in downtown L.A. I was going to downtown L.A. for a party with Dale Earnhardt Jr. with Pepsi. Before the party, a couple friends and I went to the one Tesla dealership, pulled in there, and it was maybe like 5,000 square-feet, it was pretty small. And just as I pulled in, Elon drove out and somebody goes, ‘Oh that’s the owner!’ And I’m like, ‘Yeah whatever, I just want to see the car.’ So I totally blew him off. That was the first mistake. That was not the only mistake I made there.”

“So I went and drove the car. It was awesome, so I bought the car. So I owned a Tesla before Tesla was cool. After I bought that Tesla, I got a letter in the mail from them asking for two things:

This is one of my all-time dumb moves. You know what I did with that letter? Threw it away.

To sum it up… the peace and quiet is key! Driving the @Ford #MustangMachE right now and that feature definitely makes it one of my favorite rides 😊👍🏼 @BroBible https://t.co/0HtePpXfv8 pic.twitter.com/7aPArawL0g

We also asked Keselowski, a Car Guy, what his experience with the Tesla’s been and if the hype is substantial. His answer was insightful.

Is the #TESLA craze all it's hyped up to be?

NASCAR champ @keselowski gives his take on the technology and the experience of driving a Musk Mobile.

"As a racecar driver, I see different things than most people do."

Check out our entire interview with Brad Keselowski below. We discuss: