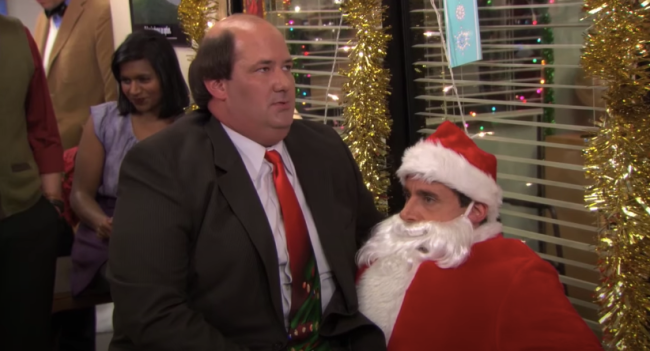 In 2007, the Washington Wizards inked Gilbert Arenas to a six-year deal worth $111 million, despite Gil playing just eight games the season prior due to a bum knee.

Four years later, NBC let its biggest star walk with little more than a pat on the ass and some goodbye finger foods.

Steve Carell shattered the hearts of millions in 2011 after retiring his Michael Scott character after seven seasons, a reality that wouldn’t sting so bad if Carell wasn’t open to signing on for a couple more seasons.

Brian Baumgartner aka Kevin Malone joined our Endless Hustle to discuss the massive and “brutal” void left with Carell’s departure and how NBC failed to roll out the proverbial red carpet to keep him around.

.@bbbaumgartner on @SteveCarell leaving The Office and NBC failing to convince its biggest star otherwise.

“We all grew up together. No one was famous. Our lives all changed together. We were there shooting together so often. And we knew that it was coming. Part of it was the build up was so intense.

I remember very vividly still shooting the scene where he proposes to Holly with the sprinklers going off, we’re all sopping wet and standing there. It’s one of my favorite line’s of Kevin’s actually, because [Michael Scott] turns and he tells the office that ‘we’re moving to Colorado’ and Kevin says, ‘All of us?’

Nearing the end of season 7 of The Office and Michael Scott finally finding the woman for him in Holly and proposing to her is one of the best moments of the show for sure. pic.twitter.com/p4oABhLGaj

“Because of course if Michael leaves everyone must go with him, right? And I think that was kind of a part of it as a cast as well that we all worked together. So of course if someone was leaving we were all going.

I respected his decision immensely. He had told a really intricate, hugely journeyed story for a comedy. He had stuch around after he became the biggest comedy star in film. And there was no bad feeling. It was just like we’re going to miss our friend. And on The Office Deep Dive podcast, it’s one of the questions I eventually get to asking everybody:

When Steve left, what was the greater loss: Steve or Michael? Almost universally everyone said Steve. Even as great as Michael was.”

Baumgartner, the lead singer of Scrantonicity, confirmed the rumor the NBC dropped the ball in making a substantial pitch to get Carell, who himself described leaving as “emotional torture,” to stay.

“The sum total is that it was time to go. I think that’s what he felt. He had felt that for a while. What is clear is that NBC did not do everything they could have done to try to get him to stay. Does that mean he would have stayed? I don’t know. I don’t think he knows, but there was never a huge play made for him to stay, and his impulse was to leave, so he did.”

Meanwhile, NBC is backing up the Brinks truck for it’s 293rd Dick Wolf Law & Order spinoff. We live in a cruel and unjust world.

Listen to our entire fascinating interview with Baumgartner below. We discuss: