Brian Gross’s career in media and PR has taken him to some incredibly fascinating places.

The offices of Def American Recordings, the AVN awards, on the set of several reality shows, and even riding in limos with people like Gene Simmons and Sasha Grey to name a few.

One place Gross never expected to end up was in the middle of North Korea, running a half-marathon through a country that eventually banned Americans from stepping foot on its soil.

The story of Gross running 13.1 miles through a hostile – at least now – country starts where most adventures end. A sex toy.

“It starts with the Autoblow,” laughs Gross.

For those who don’t know, the Autoblow is an adult toy that, well, you can figure it out.

“I’ve been repping the company for years and the owner is a good friend of mine. When we met, he lived in China. He said to me one day, ‘Listen, you’ve kicked a** for me, get to China however you can, we’ll go to North Korea and I’ll pay for your trip. We’ll do a tour and run a half-marathon.”

Fast forward a couple of months and Gross found himself in North Korea with a number on his chest. Thankfully, the number coincided with a race, and not a jail cell, after Gross was caught taking a photo in a prohibited area during his trip. 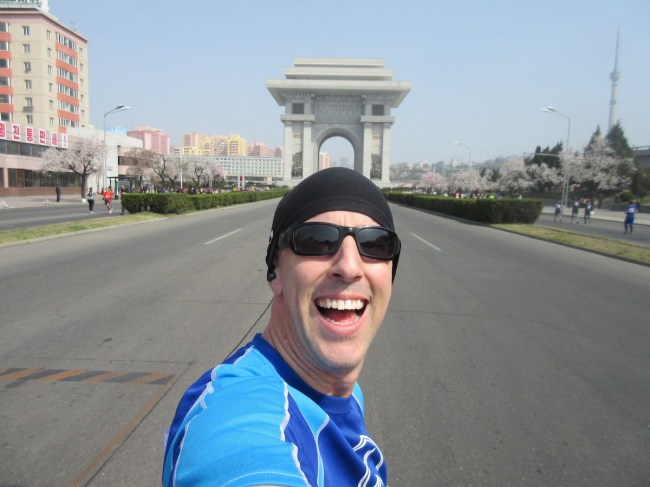 It’s not the picture shown above.

In this interview, Gross talks about how he got into the PR business, took up running, completed more marathons and half-marathons than he ever thought his body would allow, and his insane adventure through the Democratic People’s Republic of Korea.