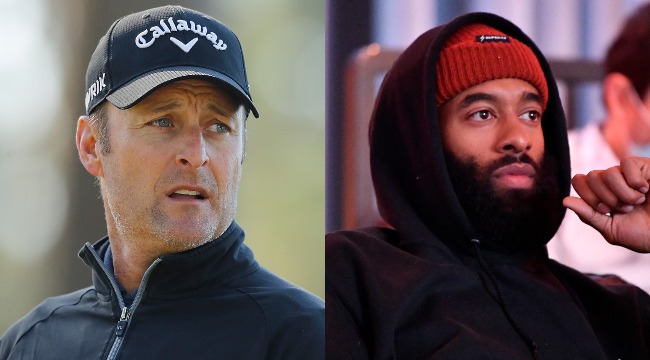 For the first time in 25 season, Chris Harrison’s future with The Bachelor franchise is in jeopardy after the longtime host went to great lengths to defend former contestant Rachael Kirkconnell after photos emerged on social media of her attending an antebellum-themed fraternity formal in 2018. Kirkconnell was also outed for liking photos featuring the Confederate flag.

Harrison spoke out against those who jump to conclusions with social media controversies, subsequently issuing an apology for “speaking in a manner that perpetuates racism.”

Matt James, the first black Bachelor, called out Harrison for his “troubling and painful” words, and on a recent Rippin’ It Podcast appearance, James revealed that Harrison phoned him in the wake of the controversy to apologize.

After #TheBachelor's unusual season, Chris Harrison personally apologized to @MattJames919, who says that Chris is taking the steps he needs to learn.

“Chris was someone I was playing golf with a lot out there. I got to know Chris really well, spent a lot of time with him on the show, and after everything took place, he reached out to me and apologized.

And I think that was the case for a lot of people that he felt like he offended. We had a great conversation, and it sounds like he’s taking all the necessary steps that he needs to take to learn, and I’m excited to see that for him.”

In March, James appeared on the Ringer’s Bill Simmons Podcast and said: “I don’t think that anybody should be trying to cancel him. We should be calling him in to do that work that he outlined and wants to do.”

Harrison has been extremely choosy with his public presence since the controversy broke in February, posting just two photos Instagram photos following his apology, one being in support of former Bachelor Colton Underwood for coming out as gay.

Check out the full Rippin’ It pod interview with Matt James below: