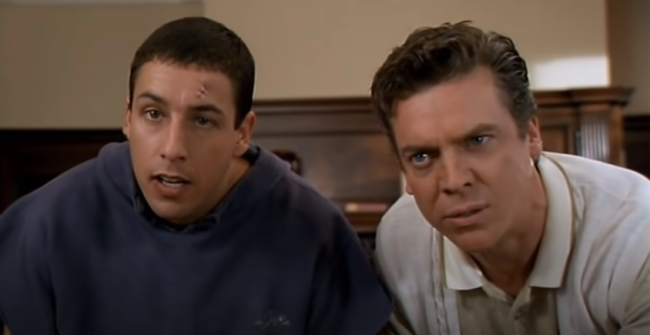 The act of imagining another actor play the role of Shooter McGavin is on par with conceiving a world where up is down, Joe Rogan is a vegan, and Gilmore lands on an NHL roster despite having no brakes.

In the 25 years since Happy Gilmore hit theaters, Christopher McDonald’s Shooter McGavin remains arguably the most convincing comedy villain of all-time and if you don’t agree you can head to the 9th green at 9 in your most formal attire.

McDonald, who very much still has it, made it clear on our Endless Hustle podcast that he bullish for a sequel, despite Sandler being coy while filming Grown Ups 18.

Shooter McGavin reveals his favorite line in #HappyGilmore and how he ad-libbed one of the most iconic sequences in the movie.

“Little accidents would happen. Like when I was trying to putt—‘Go back to your shanties people. This is golf, not a rock concert!’ And then the beach ball came out and I had the putter in my hand and I just went at it. And I hooked it and popped it, and then I had to get the damn thing off [swinging ferociously]. That was just kismet. And then I get it off my club and make the putt and the guns are coming out. Choke on that!”

On his favorite line of the movie:

“It was the first line practically I did in the movie. It’s the sequence where I’m at Grandma’s house and I’m bidding on the house and [Sandler] goes, ‘What the hell are you doing?‘ and I go, ‘Well I do dabble in real estate.’

On which one actor could muster up comparable magic playing Shooter:

Can you imagine an alternate universe where Shooter McGavin was played by someone other than Christopher McDonald?

McDonald himself hand-picked the one actor who could even come close to re-creating the magic of McGavin.

Check out our entire hilarious interview with Christopher McDonald below. We discuss: