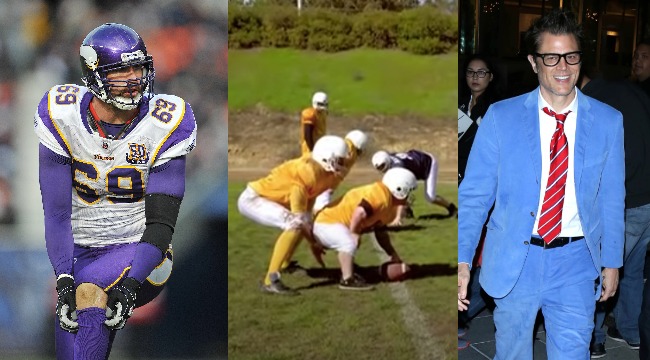 It’s near impossible to assign any credibility to an institution that pegs Dances With Wolves over Goodfellas for Best Picture, but the Academy’s ongoing snub campaign of the Jackass franchise will be viewed by future generations with the same confounding disdain as we today view withcraft execution and JNCO jeans.

Knoxville and the fellas’ commitment to the role makes Heath Ledger look like my wife and I giving therapy-mandated role play a shot during Dry January.

Soon-to-be Hall of Famer Jared Allen witnessed the magic of Jackass nose-to-nose in 2010 when he was assigned the role of Johnny Knoxville Assassinator.

He joined our Endless Hustle Podcast to discuss his admiration for the Jackass guys, going as far to say they are the “toughest human beings I’ve ever seen.”

Important Note: At the time of filming, the 6-foot-6, 255-pound Allen was coming off three-straight Pro Bowl nods and the title of NFL Sacks Champion. Knoxville played tee-ball growing up in Tennessee.

“They are the toughest human beings I’ve ever seen. [Knoxville] said after I hit him, I separated his sternum on that sack.

It was off the script. So my wife and my buddy Boomer were there. [The Jackass guys] bring me this helmet, and I could literally bend it. I think they went and got it at Big 5. If I hit him like I want to hit him, I might get a concussion. I was more worried about hurting myself.

So we did the one where he was catching a pass across the middle a couple times and I was just kind of laying up on him a little bit, and finally Boomer was just like, ‘Bro you gotta leave your feet into him. Put your helmet into his head.’ I’m like, ‘I want to but dude look at this thing, I can bend it.’

I told [Knoxville] in between sets that I’m not a linebacker. If you want to see what I can do, drop back for a pass. They’re like, ‘Let’s do it. I’m game. Let’s do it.’

So we just went off the cusp on that one, and it was one take. It was money. I was actually more afraid that I was going to slip coming off the ball because it was so muddy. One take, bent him over backwards…I’d like to say I felt bad but I didn’t.

“I think the next scene they were shooting was when Preston was getting kicked in the face with a football by Josh Brown and I was like, ‘Dude you’re going to kill yourself.'”

Those dudes are insane but totally genuine, kind, awesome people.’

Liam Neeson’s had the same stuntman for 30 years and Knoxville is out here performing on a muddy middle school field with a mutilated sternum and he still has the showmanship to ream Preston out for not picking up the weak side block.

If that isn’t showmanship, I don’t want to see the show.

We had a blast with Jared Allen. Listen to our entire conversation with him below. We talk about his playing days, who could break Michael Strahan’s sack record today, Dan Orlovsky running out of the back of the endzone, the legend of the mullet, and his professional curling career.