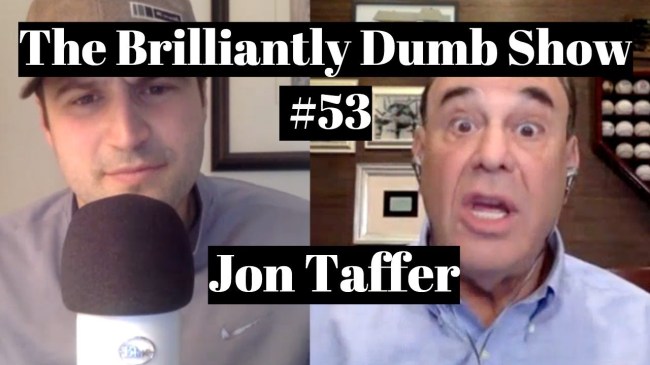 I had the great pleasure of sitting down with the zero-tolerance, no bullshit man himself, Jon Taffer for episode No. 53 of The Brilliantly Dumb Show. Taffer joined me to discuss what the future of food and beverage will look like moving on from this pandemic and the new season of his hit show ‘Bar Rescue.’

I will say, he is one of the most electric interviews that you can possibly get. The guy’s knowledge and passion for the industry is truly mind-blowing and he has a way about him that will get you ready to run through a brick wall for the guy if need be. There were numerous times throughout the 48-minute interview where I found myself amazed at what he had said, such as the fact that very little people know that he was behind the concept that created NFL Sunday Ticket. You know that little thing that has completely changed the way we watch football on Sundays?

When talking about what the future holds for restaurants moving forward, Taffer mentioned that “the restaurants that develop trust are the ones that are going to succeed.” He added to that and said that sanitary establishments and kitchens are going to be more important than they ever have been. This is why the genius behind Taffer has already created the concept for the “Taffer’s Tavern” franchise.

“So I said two years ago that I want to create the casual dining concept of the future. That has the safest food preparation, the most consistent food preparation, really good food quality, obviously and runs at half the staff that a normal kitchen would run. Because of robotic cooking and cooking technologies. It is very different than anything you have ever seen, we cook with steam, with light, with microwave and convection, it is a completely scientific food concept with some of the best food you have ever tasted,” he explained.

With this concept, customers will be able to log onto their phones and watch the chef that day prepare their food step by step which enhances the dining experience. Leave it to Taffer to think of this long before the virus swept the entire world off its feet.

It was an incredible interview that will have you on team Taffer for the remaining future. His passion and sympathy for what restaurants and their employees are going through certainly does not go unnoticed. Anyone that’s a fan of his show will tell you he is a screamer and someone who does not take any bullshit, but he has one of the biggest hearts in the industry. Enjoy the show folks, and before you do, be sure and subscribe to The Brilliantly Dumb Show on Youtube, Apple Podcasts, and all other streaming platforms.