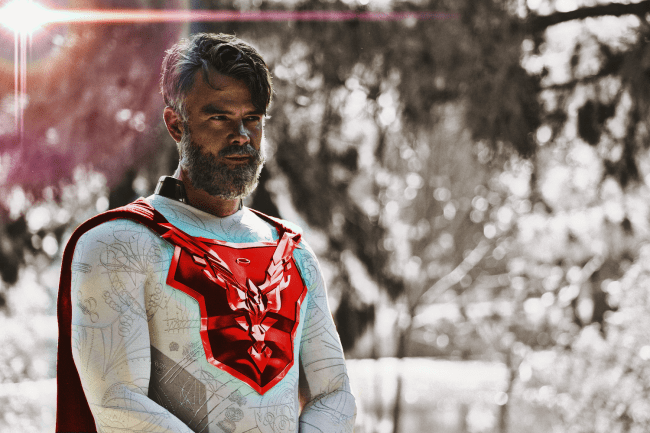 In the ever-crowded superhero genre, standing out from the pack is proving to be an increasingly difficult task, and yet, Josh Duhamel does exactly that in his new splashy Netflix series Jupiter’s Legacy.

Ahead of the series premiere of Jupiter’s Legacy on Friday, May 7, we got the chance to speak with Josh about all things Jupiter’s Legacy, fatherhood, talking to fake robots, and the time Timothy Olyphant put him in his family’s Christmas Card.

(Interview starts at 1:05:30, with full transcription below)

His Doppelganger Timothy Olyphant putting him in his Christmas Card

Eric Italiano: Josh, what’s up man? It’s an honor. How are you today?

JD: Nice to meet you.

EI: Good to meet you, as well. I don’t have much time with you today, unfortunately, so I want to get right into the important stuff — has anyone ever seen you and Timothy Olyphant in the same room?

JD: [Laughs] You want to hear a great story? A couple years ago I was at a fundraiser for [Los Angeles Dodgers pitcher] Clayton Kershaw — he does this ping-pong tournament at Dodgers Stadium on the field. And they had some media there, and I talked to a guy from the LA Times — for about 10 minutes, I sat and talked to him. And at the end he said, “So, did you have fun playing so-and-so on Justified?” And I was like, “Wait… you think I’m Timothy Olyphant?! I’m not. My name is Josh Duhamel.

So I go inside to this event, and who shows up to the event? It’s Timothy Olyphant. And we hadn’t met but we’d been hearing for years that we looked alike — and I agree — and so it was fun for both of us to hang out and laugh about it. And then towards the end of it, he [Olyphant] was like “Hey, come take a picture with my family.” So he takes the camera, and I’m sitting there with his family — you know, he’s got like four kids. So we take this photo, and come Christmas time six months later, I get a Christmas card from the Olyphants with *me* on the card saying “Merry Christmas, Happy Holidays, from the Olyphants.”

EI: So I take it I’m not the first one to make that terrible joke?

JD: No, but how cool is it that he put me on his holiday card?!

EI: Awesome! And look man, there are worse guys to be confused with than him.

What separates Jupiter’s Legacy from other superhero projects?

EI: As are you, man, so let’s get right to it. The superhero genre is, let’s call it, *quite crowded* these days — how do you feel like Jupiter’s Legacy stands out from the pack?

JD: Well I think that it’s… you’re right, there is a lot of stuff that’s out there in this genre, for sure. And I wasn’t necessarily looking to do anything for that reason. But I read this script and I was like, ‘Wow, this is really more of a family drama about this dysfunctional family of superheroes. And the inner relationships of that. So that’s what I think separates it: there’s a saga feeling about it, because we’ve got the origin story that goes back 90 years, so we can sort of see how that has affected them 90-years-later.

EI: Now, was that an appeal to you? To be playing two different versions of the same character?

JD: It was — the chance for me to play the same guy, really two different guys: a guy in his 30s and a guy 90 years later. What do those two guys look like? Especially with this kind of responsibility and pressure. 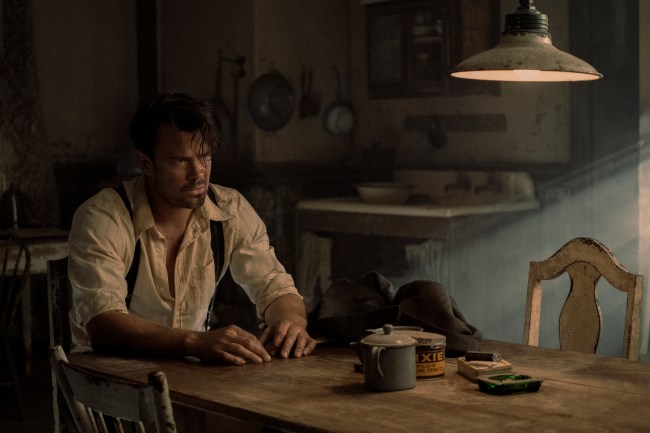 EI: You know, this is a genre that people don’t usually bring up when they discuss legitimate dramatic work — I think you’re doing some great stuff here, Josh. The family drama, as you just pointed out, is the core of the show, and a lot of that is on you. So I really enjoyed your role and what you’re describing there.

Another main theme of season one is Sheldon’s strict moral code, which includes “no killing” even if it could be argued that killing is sometimes the right thing. How do you, Josh Duhamel, feel about his moral code, and did that inform how you played the character?

JD: Eric, if I could tell you how many conversations we had about this code — it was unbelievable. Because I could not wrap my head around that very thing. Like, okay, yes, I understand that no one wants to kill anybody, but if someone is trying to take out somebody that I love, I’m taking them out first, because I don’t care. But Sheldon is so strict and rigid about this code that it makes me wonder — I really had to wrap my head around why that was, and I have some real theories about it that I don’t want to talk about because I’m hoping they’ll use it in the next season, but the idea that he wouldn’t kill no matter what makes me wonder: is this like the Sins of the Father? Where it’s a cyclical thing where he watched his father die, and now he’s inadvertently going to make his son watch him die in front of him? It’s almost like he’s got this death wish.

EI: Well, I kind of see his point, because he sees [his code] as a North Star, right? He sees it as, “When all else fails, you can rely on this code”, and from that point of view, I do get it. That’s not saying I agree with it! But I get it. 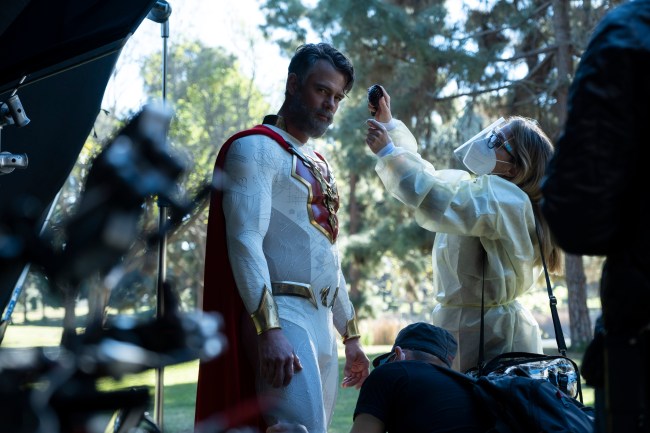 How his experiences as a father informed his performance

EI: Exactly. So, you’re a Dad. How would you feel if your real son did what Paragon — the superhero son of you Sheldon character — does at the end of Episode 1 [directly defy Sheldon’s code of no killing], especially considering the context of in-the-moment AND Sheldon’s failures to save his own father?

JD: Well, this whole thing has been a cautionary tale for me in a lot of ways, I’m not going to lie. Like, watching and living out this character, and seeing what the repercussions of being an absent father can look like. And as aspirational and ambitious as I am, the last thing I want to do is look back on my life and realize I wasn’t there for my kid. And I think that I would probably be a little more lenient than Sheldon was. I think the expectations he puts on his son are unreachable, and I think he’s starting to realize that, “You know what, I fucked up as a father, I need to figure out how I can make this right.

And for me, as Josh, with my son, I’m trying to do everything I can to make sure that my son knows he can count on me to be there always. And I don’t want to look back when I’m 80-years-old and be lonely and wishing I had a better relationship with my kids.

More difficult: playing a superhero or acting like you’re talking to giant robots?

EI: Right, right. So, this is your craft, so it’s a little odd to ask, but which did you more difficult: acting like a superhero, which is a very otherworldly thing — It’s like flying, right? How do I pretend like I know how to fly? — or did find it harder to act as if you were talking to giant robots, as you did in Transformers? Which was the harder task in terms of coming off as believable.

JD: This was harder. This was harder because in the Transformers movies we had gunfire and bombs going off and it felt like you were actually *in it*. This, you’re trying to portray this dude who’s much older, he has these powers that we can’t even imagine what it would feel like. And also, it’s all green screen — for the big battle scene, you’re up there with tethered ropes and you’re trying to… it takes more work to make that look real and believable than it did on anything I did in Transformers.

EI: How do you ground *yourself* in it, though? Are you coming from the point-of-view — are you using your experiences as a Dad to inform how you play Sheldon? How are you getting yourself in the headspace of such an extreme, larger-than-life character?

EI: Well I think that’s a strength of you playing him — despite the crazy costume and the white hair and the wild look, I buy it. Awesome show, awesome work. Josh, I thank you for your time. I also can’t wait to see you as Harvey Dent in The Long Halloween this Fall! I’m excited about that. Great stuff sir, appreciate your time.

Season one of ‘Jupiter’s Legacy‘ is now streaming exclusively on Netflix.