Josh Duhamel Describes His First Traumatizing Experience With Philly Fans: ‘I’ve Never Been Verbally Abused As Bad As I Was When I Went To Philadelphia’ 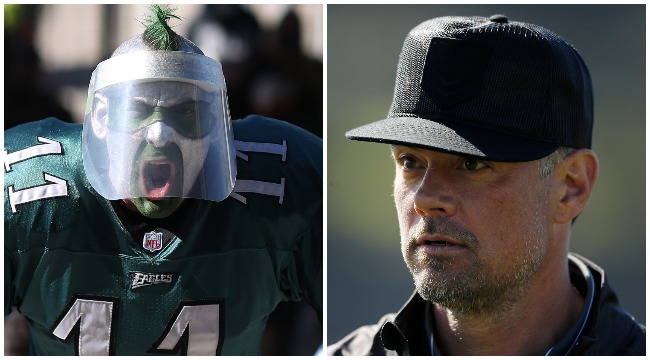 In eighth grade, my classmate named Tony (named changed to protect the victim) crapped his pants in the middle of biology class after the substitute teacher refused to excuse him from class. All throughout high school, he would never shake the proverbial stench of being The Poop Guy, even after he grew into his body and became a handsome young man.

The Poop Guy is the city of Philadelphia.

Try as they may, Philly fans will never outrun their reputation of being unhinged dirtbags—a stature that stretches as far back as the Lyndon B. Johnson presidency when fans pelted poor Santa Clause with snowballs in 1968 and whose flames have been fanned as recently as 2019, when Philly residents assaulted their own city’s athlete during a tailgate.

“I’ve never been verbally abused as bad as I was when I went to Philadelphia.

I had like little 10-year-olds I’d walk by and I had my Vikings hat, a black Vikings hat, and this little kid was like “Bam!” Elbows me. I was like, ‘What the fuck?’ He’s like 10 years old.

Little old lady is like flipping me off and I was like, ‘Whoa, where are we?’ You guys just beat us 36-6 or whatever the score was. Just lay off.

My co-host Arthur Kade, a Philly native, chalked up Philly’s pent-up rage to being pigeonholed to the “redheaded step-child,” as Philly pales in comparison to the prominence of nearby NYC and Washington D.C. And in the biting words of the great Bill Burr, “builds an entire city around a guy who doesn’t even exist.” Boom roasted Rocky.

Philly fans may be irredeemable swine, but I’d be lying if I said I wasn’t fascinated by watching them play in the mud.

There is only one Eagle who can cover D.K. Metcalf tonight pic.twitter.com/8CAV52WSom

Something tells me you wouldn’t have to scroll too deep into this dude’s feed to find a cancelable tweet.

Check out our entire interview with actor/director Josh Duhamel below. We talk about fellow North Dakota native Carson Wentz, his experience being in attendance for the Minneapolis Miracle. Josh also details making his directorial debut for the new comedy ‘Buddy Games’ and how becoming a Hollywood A-lister was unthinkable before getting his foot in the door.