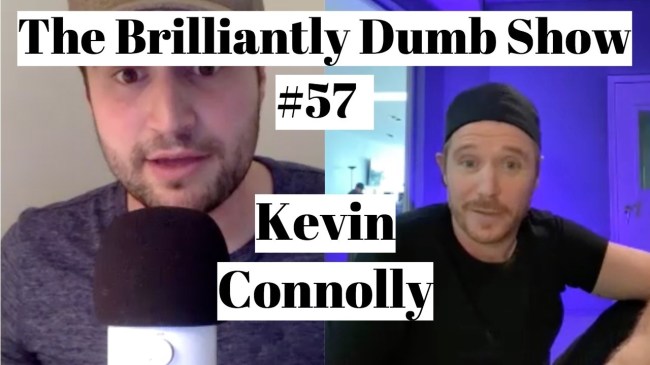 Entourage’s very own Kevin Connolly joined The Brilliantly Dumb Show to discuss his rise to stardom and the behind the scenes of one of the most successful shows in TV history, ‘Entourage.’ The power and spotlight of the show never seem to age, therefore making it easy to sometimes overlook the other roles that Connolly has had in some major box office films.

Growing up as a child actor in commercials and movies such as ‘Rocky V’, Connolly knew as soon as he hit a certain age it was time to move out to Los Angeles and continue the pursuit of having an acting career.

“I would always recommend going to college because you don’t know when your big break is going to happen. I know a lot of really, really talented actors that haven’t got their break yet, and I think it happens for people at different times,” Connolly said.

“So, I was lucky, but also I was 31 when it all happened so it was better because I don’t know if I would have handled it as well in my 20’s.”

*Be sure to check out our ‘Entourage’ podcast ‘Oh Yeah, Oh Yeah‘ while you’re here.*

Before Connolly even made his big break on ‘Entourage,’ he appeared in big-time films such as ‘The Notebook.’ Writer and director Nick Cassavetes even credited Connolly for assisting him with using his connections to help raise money for ‘The Notebook’ which of course ended up becoming a timeless classic.

It was after the pilot episode of ‘Entourage’ aired on July 18, 2004, that Connolly knew his entire life had changed.

“Entorouge literally changed my life in a day, one day from the first episode. [It was] Saturday and then the show aired on Sunday night, and on Monday my life had changed completely,” Connolly explained. “I don’t know that I would call it my ‘I made it moment’ but it is something I will never forget because it was hard to wrap my head around it.

“I had bounced around for so long and had been doing this for 20 years by then. I would then walk to my coffee place that I had been going to for 100 years, and heads would be turning when I walked in, it was strange. I lived in an apartment building and had to move out of my apartment building because people would be knocking at my door.”

I have spent time getting to know Connolly before we recorded the episode for The Brilliantly Dumb Show and have realized just how easy of a guy he is to root for.

He is one of a few successful actors that really has not let fame and success get to his head. He is a down to earth guy who is always focused on what is next in his career.

Connolly now owns and runs a company called ActionPark Media which has seen big success in the podcast world.

Be sure to subscribe to The Brilliantly Dumb Show on YouTube and Apple Podcasts for the full interview.