Kevin Na Was So Impressed With Kenny G’s Golf Game, He Invited Him To Perform At His Wedding, And Kenny Blew The Roof Off 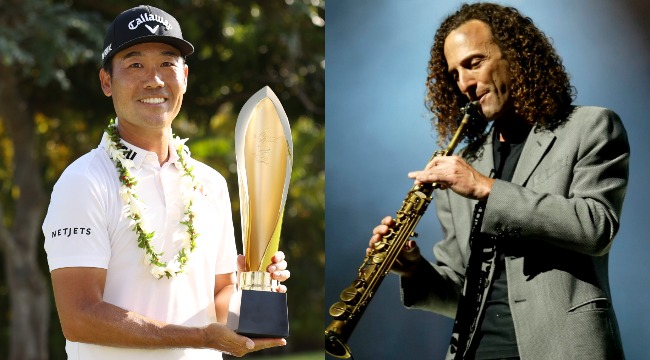 Still, Kenny G’s paper-thin frame and iconic voluminous locks somehow does not map in my brain to a +0.6 handicap who can stick shots like this.

Five-time PGA winner Kevin Na joined our Endless Hustle to discuss his friendship and admiration for one of the best-selling artists of all-time.

Na reveals that he’s played with a slew of great celebrity golfers—Carlton Banks (Alfonso Ribeiro), Ray Allen, Tony Romo (who he admits is the best but ‘kind of like a pro’ so he doesn’t count), and of course, Mr. Kenneth G.

Sultry saxophonist @KennyG impressed #PGA golfer Kevin Na so much on the course, Na paid him to perform at his wedding 🎷😂

"Amazing night. He threw on a show for us."

“My buddy Kenny G is one of the best players. He is an amazing golfer. I became friends with him playing Pebble Beach Pro-Am. He played at my wedding. It was an amazing night. He threw on a show for us. My wife and I still talk about our wedding. It’s like, ‘Ah, I still need to go thank Kenny one more time.’ It was that good.”

Kevin Na may be the first man in history to dare pen an anniversary post about someone other than his significant other, and by God, I respect the hell out of it.

“But he’s an amazing golfer, a one or two handicap,” Na continued. “He’s like a serious golfer. And he’ll text me, ‘Hey Kev, what’s the ruling on this?’ He just sent me a video message with him and Ray Romano, he’s like, ‘Hey we have this ruling question, can you help us out?’ He’s just a great golfer.”

Moral of the story: Never judge a book by its cover or a golfer by his day job.

Check out our full interview with Kevin Na (and SI Swimsuit Cover Model Camille Kostek) below: