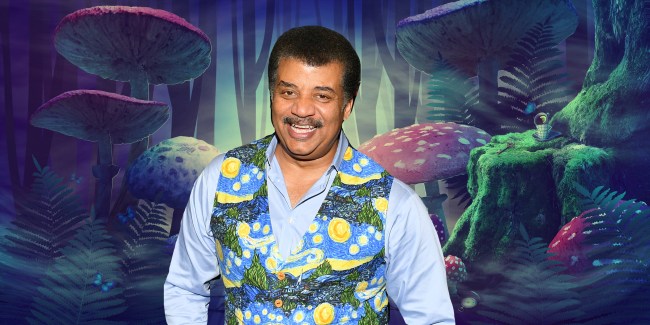 The Overview Effect: A cognitive shift in awareness reported by some astronauts during spaceflight, often while viewing the Earth from outer space.

“The vast loneliness is awe-inspiring, and it makes you realize just what you have back there on Earth,” said NASA’s Jim Lovell, part of the crew of both Apollo 8 and Apollo 13.

One doesn’t necessarily need a seat on a NASA rocket to acquire a profound shift in perspective and interconnectivity, they just need the cell number to Randy from my hometown.

The public is shifting its view of psychedelics from something dread-locked dirtbags take at Woodstock as a form of escapism to a practical vessel of overcoming trauma and understanding the universe through a dissolution of self.

In a small but noteworthy clinical trial of psilocybin as a treatment for depression, 85 per cent of participants experienced significant reductions in their symptoms, and an increased sense of connectedness was commonly reported by those whose depression symptoms improved. In another trial, of those participants who experienced significantly reduced depression, 94 per cent described feeling a new sense of connection to the world around them, with the same number reporting increased connection to other people even up to a year later.

We sat down with Neil deGrasse Tyson, a man who’s spent his life deepening his connection with The Great Beyond, to talk about how substantial psychedelics can be in this quest.

We asked @neiltyson about the role of psychedelics in understanding the universe.

It saddens me to announce that contrary to prior consensus, we did not interact with aliens at Brad's bachelor party. @endless__hustle interview: https://t.co/5KEN4u1XUk pic.twitter.com/DPR5c7pLqf

“The human brain, when functioning perfectly, barely gets it right…You can buy whole books on optical illusions…And I’m thinking to myself, if we can collect simple line drawings that confound our human brain’s ability to understand what is objectively true, to then say, let’s add some chemicals in! Let’s add some to connect you deeper to nature. We’re barely connected to nature as it is. So no! I’m not on the line saying, let me get some psychedelics so I’m more plugged in to the operations of nature. I’m not that person.

The stories we tell ourselves…

Ever since I started taking mushrooms regularly I see pictures like this completely differently. Almost like I’ve pulled back the wallpaper on the wall of the universe. pic.twitter.com/3nAgWIG7ih

Listen to our full Endless Hustle interview with the brilliant Neil deGrasse Tyson below, and click here to purchase his new book Cosmic Queries: StarTalk’s Guide To Who We Are, How We Got Here, And Where We’re Going. It’s become a #1 best-seller.