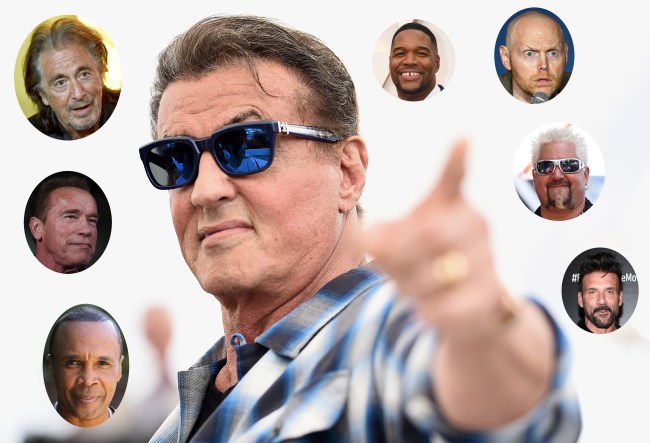 I’m not a big God guy, but he’d make me a believer if he could somehow plant me at Stallone’s $110 million Rocky-themed Los Angeles mansion on December 7, 2019.

And oh yes, the most famous magician in the world casually doing card tricks in the other room to an audience of three.

For review, let’s assess the diversity of the talent:

Esteemed party attendee Frank Grillo joined our Endless Hustle podcast to unpack a night that us peasants can only watch movies about.

"He pulled out the original Rocky script & read the first 3 pages to me."@endless__hustle interview: https://t.co/5KEN4u1XUk pic.twitter.com/Q31pp0j50o

On drunkenly confronting a guy with 142 career sacks.

“Michael Strahan was there. We were all drinking a bit. At one point, I got in a four-point stance in front of Strahan. I go, ‘I don’t think you got it anymore.’ And you see the athlete click in. He said, ‘you really want to do this?’ And I said…no I don’t want to do this.'”

If you happen to find yourself wedged in between a Triple Crown actor and five-weight world title holder, the universe will come to you.

And we’ll curtain close with a little light reading from Rambo.

“And then there was Sly hosting the whole thing. At one point Sly brought Joe Carnahan and I into his office. He pulled out the original Rocky script from a Lucite covering and he read the first three pages to me and Joe. From the script. And we’re looking at each other going, ‘This is amazing.'”

May I be reincarnated as a bug, and placed on the rhino skin coffee table at Sly’s crib with a droplet of cold beer and a hot string of Fieri’s pork butt. Tickle me pink.

Listen to our entire fascinating Endless Hustle interview with Grillo below. We chat about: