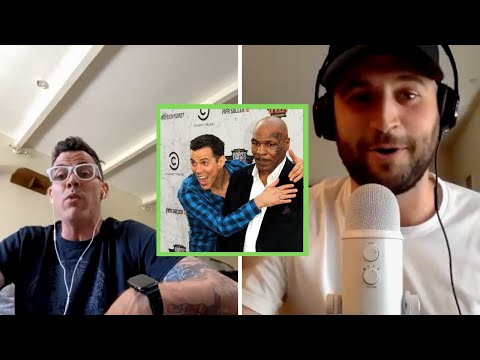 You can not find a guy more willing to lay it all out on the line for the greater good of content more than Steve-O. The one-time professional clown saw tremendous success risking his life in stunts for MTV’s hit show ‘Jackass.’ There is nothing off-limits for Steve-O, no stunt too extreme, and no topic that he minds commenting on. This makes him the ultimate guest for a podcast.

Steve-O joined The Brilliantly Dumb Show this week and discussed his encounter in the Hollywood Hills locked in a bathroom with Mike Tyson for 2-3 hours partaking in certain…activities. If that visual in your head wasn’t wild enough, things get crazier when he discusses being locked up in a psych ward with the legendary knockout king years later.

“It was crazy.” Said the Jackass star. “We were at least in the bathroom that night for 2-3 hours. After that, the next time I saw Mike Tyson we were locked up in a psychiatric ward. While we were in there I was begging him to let me run into his fist with my face. He wouldn’t do it, but then we went on the Charlie Sheen roast and we did it. When I ran into his fist you can see he broke the shit out of it.”

It is a story that only Steve-O can tell where you know for a fact that he is not lying. This man is as wild and as entertaining as they come which led to an amazing interview. Steve-O went into great detail on his journey to ‘Jackass’ and becoming one of the world’s most notable stunt men.

Steve-O has a new comedy special called ‘GNARLY’ out now that’s available to purchase and stream at his website steveo.com.