Delivering Incredible, Life-Changing News To A Friend Of The Brilliantly Dumb Show 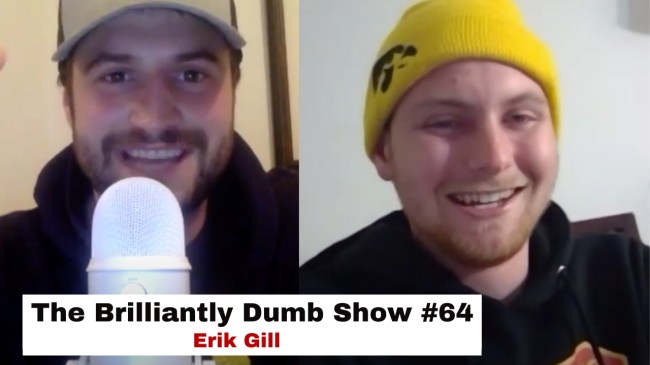 Sunday afternoon I received a direct message from the brother of a long time friend of The Brilliantly Dumb Show. It was a request for me to let his brother, who has been battling cancer for the past year, know that his cancer was in remission. Erik was told by doctors that he had a 4% chance to see his 21st birthday as his cancer was expected to spread. It’s hard for me to wrap my head around the fact that this young man’s family wanted me to be the one to inform him of this life-changing news (literally.) But, they did, and I knew it would be one of the most touching moments of my life.

At 8:00 that night Erik’s family had told him that there was someone waiting for him on the other end of a Zoom call, that someone was me, Big Game Bob. We have had guest after guest on our show, I have had the opportunity to interview guys like Michael B. Jordan, Kevin Connolly, Nick Swardson, and some other fine folks, but I have never been as nervous as I was for this call.

I ran everything in my head as much as I could in a span of the six hours that I had to prepare and wanted to make sure I delivered this news in the most memorable way possible for Erik. What entails next is hard for me to put into words, to be honest, words don’t really do it justice. Enjoy this moment with Erik, which I deliver at the 12:10 mark.

A huge congrats to Erik and his family for having the courage and drive to beat this brutal disease. Erik, you are an absolute warrior and I am beyond inspired by you and your fight.

Months ago @erik_gill_ was told by doctors he had a 4% chance to live another year as his cancer was starting to spread. Last night his family asked me if I would do the honor of giving him the incredible news that his cancer was in remission and that he is going to make a full recovery. Why someone would choose me to deliver that news is something I can’t wrap my head around, and probably will never be able to. It was one of the most surreal moments of my life, @erik_gill_ keep fighting the good fight buddy. So, so happy for you and your family and I can’t wait to have you out in cali to hang with me. A true warrior, and friend of the pod.