The MCU Has Introduced Perhaps Its Greatest Character Yet: Throg, The Frog Of Thunder 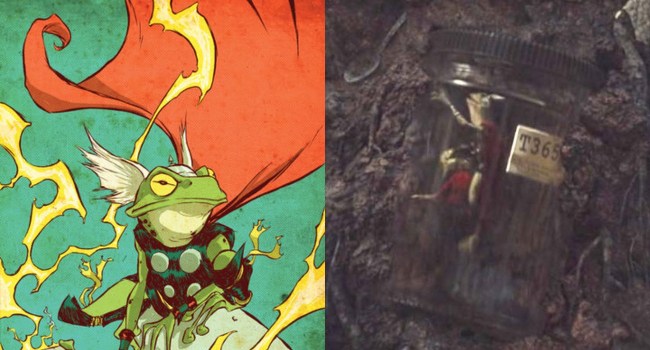 Loki has now well and truly devolved into a full-blown Marvel Cinematic Universe-induced acid trip, as the first season’s fifth and penultimate episode, “Journey Into Mystery”, was chock full of obscure Easter Eggs that reference greater Marvel lore, including the introduction of the first Thor variant in the MCU: Throg, the Frog of Thunder.

Warning: spoilers for episode five of Loki, “Journey Into Mystery”, will follow.

Throg, while obviously no more than a silly throwaway gag within the context of the Marvel Cinematic Universe, is very much a real Marvel Comics character.

First debuting in 2009’s “Lockjaw and the Pet Avengers #1”, Simon Walterson — yes, Simon Walterson — was a college football star whose life took a dark turn after he suffered a career-ending injury and lost his pregant wife and unborn child. That downturn ultimately led Walterson to seek out a witch to help him speak to his wife in the afterlife. Unable to pay the witch for her services, though, she turned him into a frog.

After making his way to New York City and adopting the name Puddlegulp, Walterson eventually crossed paths with the *real* Thor, who — along with his trusty Mjolnir — also happened to be turned into a frog by Loki. Whilst in frog form, the also-in-frog-form Mjolnir was broken. Lo and behold, Puddlegulp went to pick up that broken piece of Mjolnir and, somehow, succeeded and subsequently became Throg, Frog of Thunder and the wielder of Frogjolnir. You got all that?

While it’s doubtful that Throg is ever referenced in the MCU again, it is, technically, the first variant of one of the main Marvel heroes that we’ve seen, which suggests that there could be more of them out there, similar to the dozens of variant Lokis roaming The Void.