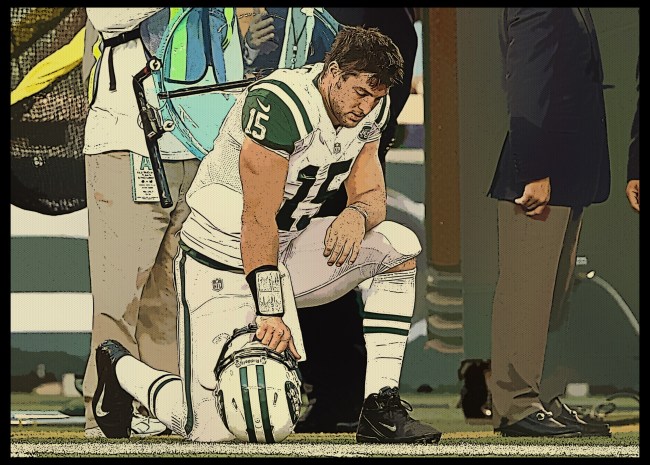 Far be it for me to claim Tim Tebow is Jesus Christ, but has anyone seen them in the same room? Food for thought.

While your typical celebrity’s idea of philanthropy is participating in a tone-deaf montage video about [insert hot topic cause here], the newly-minted Jags, uh, tight end walks the walk.

Tebow has erected hospitals and orphanages in developing nations, joined the fight against human trafficking, and holds  “Night to Shine” events all over the country, where thousands of special-needs teens are gifted a full prom experience—complete with a red carpet, paparazzi, limo rides, beauty stations, shoe shines, dinner and dancing.

All this is just an average Tuesday for a dude so pious he won’t even swear in an NFL huddle.

We spoke with former Jets GM Mike Tannenbaum, who is now behind the popular football think tank publication The 33rd Team, about his first-hand experience with Tebow’s saintly ways after the Jets signed him in 2012. The season prior, Tebow tossed the iconic 80-yard score to Demariyus Thomas on the first play of overtime in the first round of the NFL playoffs, throwing for a career high 316 yards and two TDs. Tebow Mania was in full effect.

In an effort to remove Tebow from the New York media frenzy, Tannenbaum invited Tebow to his home for dinner with his entire family, inclusive of his wife, kids, and mother.

Things were going peachy, until Tannenbaum decided to kick into motion a post-dinner icebreaker game.

After the @nyjets traded for @TimTebow in '12, former GM @RealTannenbaum invited him to dinner w/ his family.

In the Tannenbaum house, you must to earn your dessert by revealing one nice thing you've done for someone else.

“One of the things we do in this house is you have to earn your dessert eligibility. You have to do one nice thing for somebody else to earn your dessert. So I thought this would be a great ice breaker. We’re going to go around the table, everyone’s going to have to say what’s the one nice thing they did today so they could be dessert eligible and that’d be a great way to get the conversation going.

My mom is of very modest means, happens to just be in town, so she’s definitely taken aback by all the circumstances. So I’m like, ‘Alright mom, you’re going first. Why should you get dessert?

She’s like, ‘I was in the office yesterday and I bought lunch for one of my co-workers.’

A couple of other people share, and it gets to Tim’s turn, and I’m like, ‘Tim, what’s the one nice thing that you’ve done for somebody else?’

And he goes, ‘Well, we’re building a pediatric cancer center, we’re working on sex slavery in Europe…’ And like four other institutions that they’re building.

I’m like ‘Tim, congratulations, you get the chocolate chip cookie. And mom, the turkey sandwich you bought yesterday never looked so bad.'”

Meanwhile, I gave a homeless man my dinner leftovers last month and I’ve been buying lotto tickets every day since. This is how charity works, right?

Check out our full interview with Tannenbaum below: