There’s A Devil Coming To Westview, But Who? Diving Into Agatha’s ‘WandaVision’ Dungeon 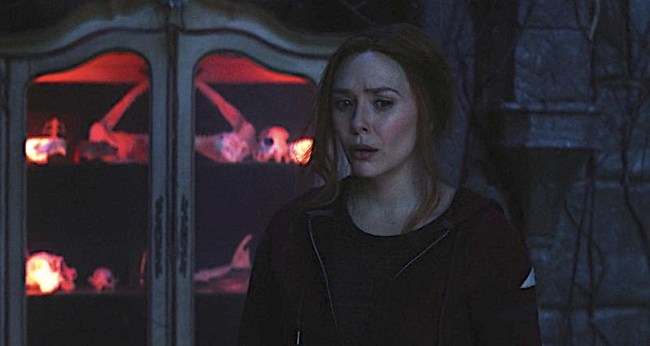 After nearly two months of television that saw them keep their cards painfully close to their chest, WandaVision finally revealed who their villain is in this week’s revealing seventh episode, “Breaking the Fourth Wall”. But, because it’s always the case with WandaVision, not everything is quite as it seems, as the reveal regarding Kathryn Hahn’s Agnes is likely just one of many to come, especially when considering the demonic, Easter Egg-filled dungeon that the episode left off in.

Standing in her seemingly ancient basement dungeon, Agnes finally revealed herself to be more than just an incredibly punctual noisy neighbor, as she confirmed what fans have long speculated: that she’s actually the Witch Agatha Harkness and that she’s been pulling the strings from behind-the-scenes all this time, slowly but consistently working to unravel Wanda’s sanity.

But before we dive into the “who” of the matter, let’s talk about the what, specifically, what we see in Agatha’s suburban basement dungeon.

From the second Wanda enters the room, satanic iconography can be found in every corner. From Baphomet (the goat head on the wall) to a bevy of skulls encased in a glass display. From the purple vulture seen behind Agnes as she enters the room, to the symbolism that lines the ceiling of the dome, whatever entity is being worshipped in Agatha’s basement, it’s of the demonic variety. 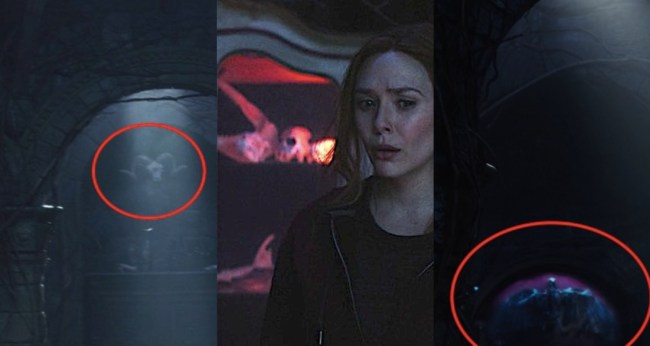 Of all the items found in Agatha’s basement, though, the most important is quite obviously that ancient textbook that’s seemingly emanating some sort of energy.

Based on my research, this book is most likely something known as The Darkhold, otherwise referred to as the Book of Sins or the Book of Spells in the Marvel Comics.

What makes the (potential) appearance of The Darkhold so intriguing — other than the fact that it’s said to have “unspeakable” power” — is that the book itself is made from Dark Matter from the Dark Dimension, which is somewhere we’ve already been in the Marvel Cinematic Universe, as the Dark Dimension is where Dormammu, the Doctor Strange enemy, was last seen — after all, he’s the ruler of the Dark Dimension. Granted, the last time we saw Dormammu, he’d made a bargain with Doctor Strange not to invade Earth. His Earth. Who knows what kind of loopholes the multiverse might create.

In Marvel Comics, The Darkhold — or the Book of Spells, thought to contain "unspeakable power" — is made out of Dark Matter 📙

Dark Matter comes from the Dark Dimension, which is ruled by none other than… Dormammu ⚫#WandaVision pic.twitter.com/MGrGUpzC2T

The Dark Dimension isn’t the only alternate reality lurking in the shadows, as the Marvel Universe also has the Dream Dimension, which is ruled by Nightmare, who’s long been rumored to be the villain of next year’s Doctor Strange In the Multiverse of Madness and also just so happens to have a general purple vibe to him, which is the color energy we see pulsing through the roots of Agatha’s basement and in the magic she wields against Wanda.

You know who else just so happens to come from an evil alternate dimension?

Similar to Mephisto — who has a comic book history of absorbing the powers of Wanda’s twins — Nightmare has also been known to manipulate and zap the energy from the living, as he has the ability to draw power from the psychic energies of the subconscious minds of dreaming beings. Could this be why Agatha (and Ralph) want Wanda to remain in Westview? Why they want everyone to remain in Westview? After all, the residents of Westview, Wanda included, are effectively living in a waking nightmare.

Throughout their history, the Marvel Cinematic Universe has been known for not always being 100% faithful to the source material, chopping and changing story elements as they see fit. Could that be the case here, as the MCU sort of rolls Mephisto and Nightmare into one overarching, multiversal villain? Could Nightmare/Mephisto be hoping to harness Wanda’s immense power in order to build a doorway between their realities? Despite the fact that there are just two episodes of WandaVision left, the specific identity of the “big bad” remains a secret, and that’s a credit to the series’ ability to build towards what’s shaping up to be a massive reveal.

Regardless of which villain it ultimately ends up being, the fact remains that we’re essentially at the goalline of WandaVision *finally* making a solidified connection to the Sorcerer Supreme, who’s been noticeably and oddly absent from the events unfolding in Westview.

Perhaps that’s exactly how Nightmare (or Mephisto) planned it.

Doctor Strange in Infinity War: “My job is protecting your reality douchebag.”

Doctor Strange when he has a reality to protect: pic.twitter.com/U7TQXRcARe