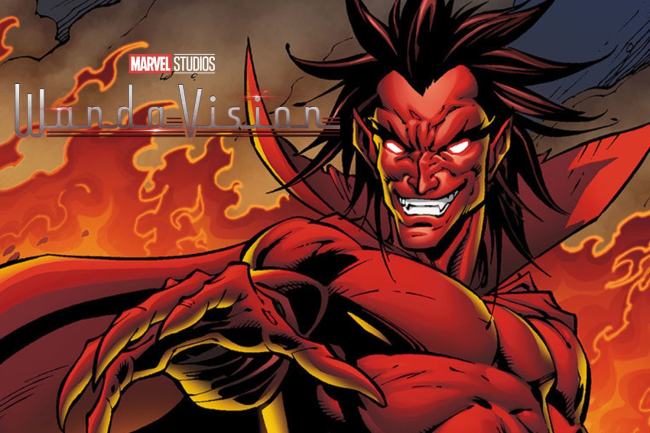 When Marvel Studios first announced their plans to expand to television via Disney+, studio head Kevin Feige promised that the series would be as crucial to the MCU’s overall narrative as the films were. And with three episodes of the MCU Era on Disney+ now in the books, it certainly looks as though WandaVision is going to deliver on that promise, as the series seems to be working its way towards introducing Mephisto, one of the most iconic Marvel villains to date.

In the comics, Tommy and Billy (Wanda’s children who are “born” in episode 3) were, at first, constructs created by her powers in a similar alternate reality before she makes a deal with Mephisto to give them a soul and make them “real”. Mephisto, according to Fandom, is a “demonic shape-shifting being and one of the main antagonists of Marvel comics.” Eventually, Mephisto goes on to “kill” Tommy and Billy by absorbing them and their powers.

Now, while Mephisto hasn’t literally popped up as of yet, there’s building evidence that Ralph — the oft-mentioned yet never-seen husband of Kathryn Hahn’s noisy neighbor Agnes — is actually the famed Marvel devil.

Agnes, seemingly one of the few characters in Westview who’s aware of this reality’s true nature, has made a handful of references to Ralph’s true nature thus far. Not only does she describe him as “looking better in the dark” (it’s passed off as a sex joke, but given the context of Mephisto, the line takes on an entirely different meaning), but when Wanda and Agnes’ neighbor Bev notes that “the devil’s in the details,” Agnes quips back by saying “that’s not the only place he is.” With Agnes keeping a noticeably close eye on Wanda, could Mephisto be allowing Wanda to live and give birth in her alternate reality with the goal of eventually absorbing her two children? Also worth remembering: in the first trailer for WandaVision, a startled Agnes asks Vision if she’s dead.

Marvel promised their Disney+ shows would be crucial to the MCU's narrative and #WandaVision is on the verge of delivering on that promise.

The villain and the multiverse to come, on the latest @PostCredPod🍿

What makes Mephisto such a likely candidate beyond his source material connections are his links to Doctor Strange, who I’ve been predicting will show up in WandaVision for some time.

Before the series premiere, I reasoned that — beyond the already confirmed links between the actual projects (WandaVision and Doctor Strange 2) — that the Sorcerer Supreme is the only Avenger with the requisite skill set to recuse, or possibly contain, someone as powerful as Wanda or whoever her multiverse-altering actions may introduce.

Marvel execs have been promising that WandaVision will be tying into the plots of both Doctor Strange In the Multiverse of Madness and Spider-Man 3, and given that Mephisto has a history with both of those characters in the source material, he seems most likely to be the villain at the center of the MCU’s upcoming multiversal chaos.