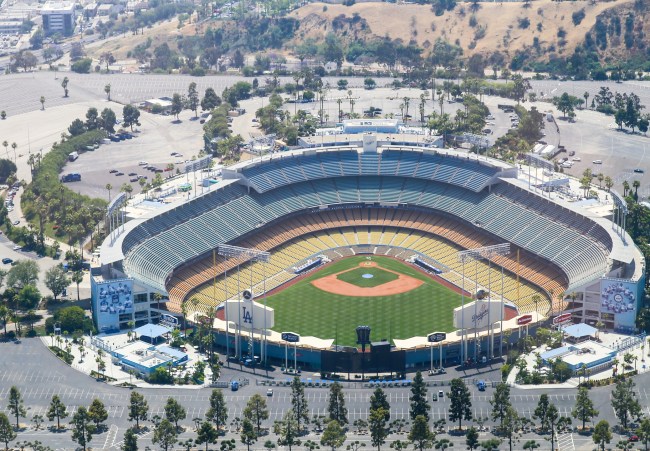 A neutral site World Series is something I could 100% get on board with. I don’t actually think my Tampa Bay Rays will make the World Series next season, if there even is one, but I love the idea of the World Series moving around in the same way the Super Bowl does.

The rumor mill has piqued my interest with this possibility of a neutral site World Series. Just last week, the rumors were the MLB was considering a 14-team, 140-game season. Baseball insider Matt Spiegel of 670 The Score Chicago is saying he’s now hearing MLB is considering a 100-game season with Dodger Stadium in Los Angeles as the neutral World Series site and if the Dodgers make the World Series the location would get bumped to Anaheim or San Diego.

From a well informed source that does business with multiple MLB execs: The 100 game season being discussed would include eliminating the All Star game in Los Angeles, but would deliver a neutral field warm-weather World Series at Dodger Stadium as compensation. (1/2)

The 100 game season being discussed would begin July 1, eventually pick up the post All-Star game schedule, & conclude October 15th. If the Dodgers made the WS, “road games” would take place in Anaheim or San Diego. Obviously, many questions remain, & talks are fluid. (2/2)

This scenario assumes that ALCS and NLCS would take place wherever qualifying teams play, not at a neutral warm or domed ballpark. An obvious risk for series’ that could end as late as November 3rd.

Matt Spiegel of 670 The Score Chicago heard from a source that Major League Baseball executives have been discussing a 100-game season that would begin on July 1 and conclude on October 15. It would essentially pick up the second half schedule, eliminating the All-Star Game while hosting the World Series at a neutral warm-weather stadium — ideally Dodger Stadium.

In the event the Dodgers, who won 106 games last year, made it all the way through the playoffs, the World Series would be hosted in Anaheim or San Diego. The earlier rounds of the playoffs would be played in the cities of the teams involved, which might be tough since the postseason would extend into November.(via Yahoo! Sports)

Personally, I’m skeptical that we’ll see any semblance of professional sports until some point in 2021 but that’s entirely based on the trajectory of the past two months and the foreboding sense that there’s no end in sight to our dystopian future. I wish I could be more optimistic but I can’t see how we can have pro sports without fans, and fans won’t be able to attend mass gatherings unless we know they’re safe, and that won’t happen until there’s a vaccine.

For more on this developing story, you can click here to visit Yahoo! Sports.