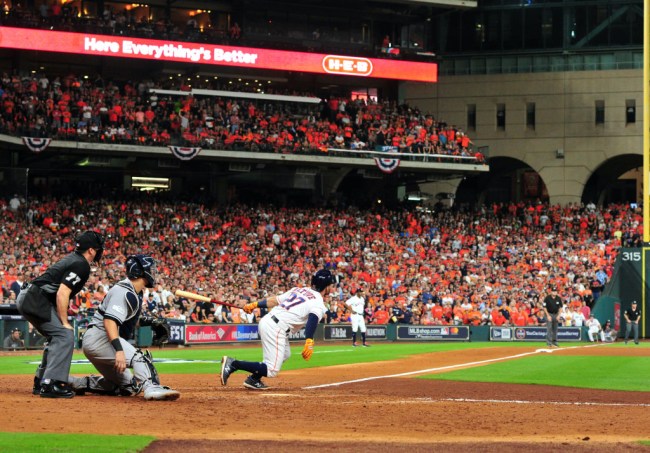 At the current moment, life is very different for everyone, including strippers, celebrities, grocery store employees, influencers and baseball players. Thursday was supposed to be opening day of the MLB, but the entire world has been turned upside down as the 2020 baseball season was suspended. Now there is talk that if the 2020 MLB season isn’t canceled, that the upcoming playoffs could be expanded.

Major League Baseball is considering expanding the 2020 playoffs from 10 teams to 14 teams, according to reports. On Friday, Jon Heyman of the MLB Network said that “almost anything is on table” in regards to the shortened season.

“MLB may expand the playoffs from 10 teams to 14 this year,” Heyman tweeted. “It’s been proposed for subsequent years but this could be the time to experiment. Would also be a way to add big games, boost excitement and yes revenue. Nothing close to final. Almost anything is on table.”

MLB may expand the playoffs from 10 teams to 14 this year. It’s been proposed for subsequent years but this could be the time to experiment. Would also be a way to add big games, boost excitement and yes revenue. Nothing close to final. Almost anything is on table.

Most likely, there will be three division winners and four wild card teams from both leagues.

This would give a new wrinkle to the MLB postseason, at least for one season, and as a reason to experiment with potential playoff formats for the future. This could be a fun experiment and bring excitement to baseball, when sports will be a significant part of resuming “normal” life in hopefully the somewhat near future.

MLB is hopeful that the current best-case scenario is that the 2020 season could start in late May with a 140-game schedule, down from the regular 162-game season.

“My optimistic outlook is that at some point in May we’ll be gearing back up. We’ll have to make a determination depending on what the precise date is as to how much of a preparation period we need,” said MLB Commissioner Rob Manfred. “But the one thing I know for sure is baseball will be back. Whenever it’s safe to play, we’ll be back. … We will be part of the recovery, the healing in this country from this particular pandemic.”

If the season gets pushed later into the summer, there is talk that teams would attempt to make up games by playing more doubleheaders that are only seven-inning games, perhaps one doubleheader every Saturday.

Rumors are swirling that the regular season would go until mid-October, there would also be expanded rosters to 29 players to compensate for fewer days off.

Playoffs would begin in late October and extend into November or maybe even into December. There is a possibility that the World Series could be played at a neutral ballpark that is in a warmer climate. People might finally be excited for baseball in Florida.

Mega agent Scott Boras has proposed a 144-game season starting on July 1. The playoffs would still have wild-card games, a five-game division series, a seven-game championship series, and a World Series. The World Series would be held from December 3-26. Games would be held at neutral sites at one of MLB’s eight domed stadiums and three southern California stadiums, the Angels, Dodgers, Padres.

“We have it all mapped out,” Boras told the Los Angeles Times. “It’s workable. We’ve done climate studies, and in Southern California, the average temperature in December is 67 degrees, which is better than late March and early April in most cities. We have 11 stadiums we could play postseason games in. I’m gonna get my neutral-site World Series after all.”

“I think having a planned World Series at a designated site would be a tremendous economic gain for our industry,” he told the Times. “You could secure corporate sponsorships and have entertainment surrounding it. The Super Bowl has one game. Here, we can have five to seven days of festivities.”

These are crazy times.