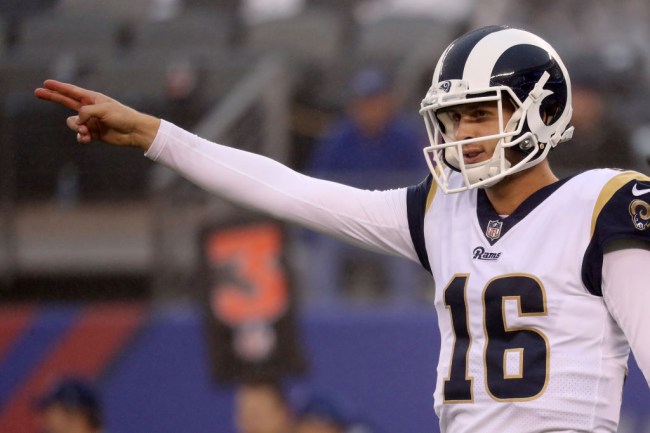 We’re reaching crunch time in the fantasy football season. You’re in either one of three spots with your team right now: 1) your team has had a good year and you should make the playoffs unless your whole team gets injured (which is possible because everyone is injured this year) 2) your team is doing ok and you’re fighting for a playoff spot 3) your team sucks and it’s time to play a lot more FanDuel and DraftKings. Hopefully this column helps you regardless of what the position is. Just create your lineups without overthinking yourself. Sometimes it’s best to step away. If you get a little too cute before kickoff, you end up replacing one wide receiver with another and it ends up costing you a game. Play the best players in the best matchups. Most of the time the information doesn’t change between Friday and Sunday on two healthy players.

Goff excelled for us last week in this spot and we’re going back to him. The Texans defense is allowing the fourth most fantasy points to quarterbacks including 19+ in three of their last four games.

The Giants have clearly quit on their coach, but Darkwa hasn’t quit just yet. He’s going against a 49ers defense that has given up 97 or more rushing yards in seven of nine games this year after allowing the most fantasy points to running backs last year. And their two starting safeties are hurt. Oh and they give up an average of 63 receiving yards to running backs this year. The hits just keep coming

Apparently New York is the city to own running backs this week. Forte is back from the dead and his old body has a little extra time to rest after last week’s strong game. He gets to produce another strong effort against a Buccaneers defense that has given up the third most fantasy points to running RBs.

Gone are the days of hoping Atlanta would unlock Taylor Gabriel. Now it’s Sanu that is easily getting the second most targets on the team to Julio Jones. The Falcons/Cowboys game has the highest total of the week, so there’s plenty of yardage and potentially a touchdown out there for Sanu to grab.

Ryan Fitzpatrick is in for Jameis Winston this week and Mike Evans is missing the game as well. That opens up the opportunity for Humphries, who will get to attack a Jets secondary over the middle, where it’s vulnerable. With two bad defenses, there’s a possibility that this game turns into a sneaky shootout.

I can’t fully endorse Eric Ebron (because he sucks) against the Browns or Garrett Celek (an unknown with a bad QB) against the Giants, so we’re rolling out Rudolph here. He certainly hasn’t had a great year, but she’s shown signs of life at times. We’ll see more life from him this weekend as he takes on a Redskins defense that has allowed 59 or more yards in six of eight games.

Philip Rivers (QB – L.A. Chargers)
Bench your fantasy QBs when they play the Jaguars. It’s that simple. “Sacksonville” is crushing QBs and only two QBs have surpassed 10 fantasy points against them this year.

The Jets have done a pretty good job against the run after a slow start to the year. If RBs are only producing 3.46 yards per carry starting in Week 3 and have only scored one rushing touchdown then Martin doesn’t seem like a good idea. He showed last week that the team has no problem making him useless and could easily follow it up with another poor effort.

The dude says he’s not getting enough touches (including goal line touches), starts off well, and then fumbles the ball twice, including one at the goal line. You know what doesn’t get you more touches? FUMBLING THE FOOTBALL! The Browns are terrible against the pass, but actually decent against the run, so Abdullah will go back to being meaningless this weekend. He sure as hell isn’t getting the goal line carries anymore.

I know you’re excited that Benjamin switched over to the Bills and now doesn’t have to compete with much for targets, but here’s a downer for you: it ain’t happening this week. He goes head to head with the best rookie cornerback in the league, Marshon Lattimore, who has been shutting wide receivers down all year.

Figuring out when to start Hilton is pretty simple: start him against bad defenses indoors, bench him against good defenses or when he plays outdoors. Follow that flow chart this week and you get Hilton up against the fifth best pass defense according to Football Outsiders. They’re specifically allowing the second fewest fantasy points to WRs, so it’s time to sit Hilton back on the bench.

People are getting excited because Clay is on track to return this week, but slow down there big fella! The Saints defense has tightened up all over the place including tight end. They’ve only allowed more than 35 yards receiving in one game this year. Wait a week before returning to Clay.