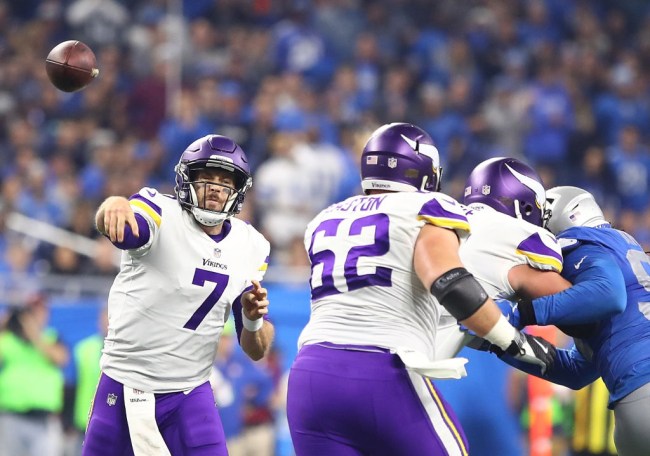 You either have one or two weeks until your playoffs start. Are you getting excited? And if you’re out of the playoffs, remember there’s always daily fantasy to keep you interested for the rest of the season and into the playoffs. Everyone is off the bye, so lineup decisions might get a little tough. Remember the delicate balance of matchup and talent. You don’t want to take too many risks at this time of year. You have a good amount of data to make your decisions. Don’t be afraid to bench your higher-end guys if the matchups are really bad for them.

Below is a list of guys I’m focused on for one reason or another for week 13 of the 2017 Fantasy Football season. They’re especially important in daily fantasy sports (DFS). I never highlight your stars because you’re obviously starting them unless I tell you otherwise. If you’re curious about guys you don’t see listed here or have specific lineup questions, you can always find me on Twitter (@MrT_BroBible) to ask questions, but remember to mention league specifics like PPR. You can always ask about trades as well.

There are a number of good streaming options at quarterback this weekend, but the guy I kept ending up with off the waiver wire was Keenum. He’s playing for his job, but the pressure didn’t get to him last week when the same applied, so why would it now. All his weapons are healthy and he’s produced 17+ points in his last four games. The Falcons are allowing 16.9 fantasy points to QBs, which is slightly more than what the Lions (who Keenum ripped up on the road last week) are producing, so the defense shouldn’t scare you. The Falcons should also score enough points to keep Minnesota aggressive on offense.

Perine has rushed for over 100 yards in the last two games since Rob Kelley got hurt, but that’s not the only reason we like him here. Dallas also has the 28th ranked run defense against Football Outsiders DVOA. Dallas’ offense doesn’t stay on the field as long as they used to with their now mediocre offensive line and the loss of Ezekiel Elliott. Perine will still 20+ touches again and should hit the 100-yard mark again.

The Giants defense has tightened up in recent weeks, but they’ve still been giving up yardage on the ground. They’ve given up 119.5 yards per game in the four games since the bye. Their offense will be even worse now that Geno Smith is running the show, so Oakland’s offense should see plenty of the ball and could end up in some nice field position situations if and when Geno turns it over. With Oakland possibly missing their top two receivers, they could rely more on the run than usual. It all sets up well for Lynch to eat.

It took Crowder a while to get going this season, but now he’s crushing. He’s put up at least 70 yards in each of his last four healthy games and has grabbed seven catches in three of those four. Dallas has been killed by slot wide receivers all year including Larry Fitzgerald, Cooper Kupp, and Keenan Allen. Crowder’s the next up to perform.

We saw what Kupp could do with Robert Woods out last week and should expect the same this week. Arizona will have Patrick Peterson shadowing Sammy Watkins, which will leave Kupp to attack Justin Bethel in the slot for a large portion of the game. The second WR against the Cardinals has been a productive position all season and will continue again this week as the Rams’ high-scoring offense continues to produce.

Witten certainly is old and not as productive as he used to be, but this dad-runner should have a decent game on Thursday. Washington has allowed the most receiving yards to tight ends of any team in the league. Dak Prescott’s time in the pocket is limited with the offensive line struggling, so the short option routes to Witten should be featured heavily in this favorable matchup.

Stafford seems fully recovered from his recent ankle injury, but he’s had somewhat of a weird season. He’s only passed for 300+ yards in three games and this week takes on a defense that has only allowed a quarterback to do that once this season. The Ravens also have held QBs to one passing touchdown or less in all but two of their games, so it makes sense to bench Stafford for a more reliable option on Sunday.

Let Murray serve as a reminder that you never want to invest in running backs or wide receivers who have hamstring issues. They always take longer to recover from than teams want to admit and Tennessee never shut him down for some reason. Now Murray looks like he needs to retire and is continuing to split work with Henry. This week’s opponent, Houston, has only allowed 100 rushing yards to RBs twice this year, which means you’re relying on touchdowns to make Murray valuable. You got one last week, but this week certainly isn’t a given.

Their secondary is falling apart, but Seattle’s run defense is holding strong. They haven’t given up 100 rushing yards to RBs since Week 3. We never know who’s getting the carries for Philadelphia, so that limited amount of yardage is being split at least three ways and then you’re just guessing who scores the touchdowns. You can’t take that risk this late in the season.

Hilton was in a prime spot last week and failed. Now he’s in the worst spot possible against Jalen Ramsey while running on grass. The sit is pretty self-explanatory.

The Samsung commercials come to life as Bryant squares off against Josh Norman this week. Bryant’s been rather useless in recent weeks along with the whole Dallas offense sans Zeke. With Norman watching him on most snaps the Bryant downturn will continue.

Despite the loss of Eric Berry, Kansas City still does a good job of covering tight ends. They’ve only allowed one touchdown to the position all year and with ASJ’s touchdown luck this year that doesn’t bode well. ASJ has also been targeted less as Robby Anderson excels and with the Chiefs only giving up 100 yards to tight ends on three occasions this year, the blowout game for ASJ isn’t happening.