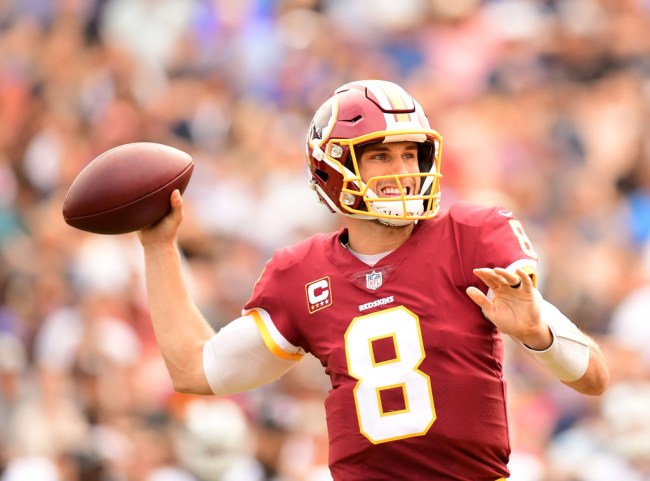 It’s a big week for fantasy football. We have a bit more information after two weeks, but the information we have will cause some owners to overreact. Now’s the time to take advantage of an 0-2 owner and buy low on some of his assets as he gets desperate. He won’t want to find himself at 0-3 because that’s a deep hole to get out of. Conversely, if you’re 0-2, you likely need to do something to get yourself going. Now is the time to trade your extra receiver for a more reliable running back or strengthen your starting lineup by trading your best player for two startable assets so that you don’t have to keep running out Shane Vereen in the flex. Knowing that you’ll likely have to go 8-3 in your last 11 games to make the playoffs feels as pleasant as being the next man to date Ryan Gosling’s ex-girlfriend. It’ll be hard to live up to expectations.

I don’t love any streamer’s potential this week, so I’m going to reinforce Cousins’ position. Washington’s passing offense has been slightly off to start the year, but there are few defenses that can get it going better than the Raiders. Washington’s a home dog in a game with the highest projected over/under of the week. Cousins should be able to fling it around and put up numbers more comparable to his preseason draft position.

He still has a problem finding the end zone, but it looks really good for Abdullah that he’s received that he’s received 35 touches in the first two weeks of the season. The Lions are clearly committed to the running game and Abdullah is being featured. In a world where quality running backs are hard to come by, you can do a lot worse than a lead back for a team in a high scoring game against a team that’s given up 54.9 fantasy points to running backs in standard scoring. Given that Atlanta has given up four touchdowns to RBs so far this year, Maybe Abdullah will even find the end zone.

While everyone keeps waiting for Christian McCaffrey to break out, Jonathan Stewart has 35 touches in two games. Clearly the Panthers aren’t ignoring Stewart. While the Panthers passing game will have success this Sunday, their running game should as well. New Orleans perennial has a bad run defense as well and they’ve given up 235 rushing yards and 185 receiving yards to RBs in two games. Stewart is good enough to throw in your lineup this week.

Last week’s game script didn’t allow Golden Tate to have a productive game. The Lions were facing a tough defense and their early lead meant Matthew Stafford only threw five passes in the second half. This week the Lions will have to score to keep up with Atlanta, which should mean Stafford will pepper one of his favorite targets.

Maybe we’re jumping the shark with Higgins, but someone needs to catch the ball in Cleveland and there will be a lot of balls to catch against Indianapolis this Sunday. The Colts have be a sieve on pass defense to start the season and even rookie Deshone Kizer should have some success. With Corey Coleman out with a broken hand and Kenny Britt in the doghouse, the opportunity is there for Higgins to build off last week’s successful game.

The Browns were the worst defense against fantasy tight ends in 2016 and they’re not showing much improvement through two games as they’ve given up big games to Jesse James and Ben Watson. Those guys shouldn’t be confused with Shannon Sharpe and Tony Gonzalez, which means Doyle should see plenty of the rock this Sunday.

Tyrod is one of everyone’s favorite quarterbacks to stream, but the Bills passing offense isn’t exactly flowing right now. It looked lethargic against Carolina and now goes up against one of the best defenses in the league. His receivers won’t be able to get open and the running game will have a hard time opening things up for the passing game. With a total of 40 for the game, all signs point to sitting Taylor this week.

Everyone’s been confused with Ingram’s usage over the last few years. It seems as if he slept with Sean Payton’s wife or something of the sort since Payton continues to give Ingram the respect he deserves. The same occurred in the offseason when Adrian Peterson was brought in to take carries away from Ingram. Until the situation gets resolved in a favorable manner for Ingram (and it theoretically should given how Peterson has looked), you have to be cautious with Ingram. This weekend you have to be extremely cautious after you saw Carolina shut down LeSean McCoy last week.

Folks drafted Rodgers with the hope of starting him for the first three weeks of the season and then figuring things out, but it’s hard to roll Rodgers out there this week. The Vikings have a stout defense that was in the top 10 against fantasy RBs last season and held down Le’Veon Bell last week.

The Patriots are well-known for shutting down the opposing team’s best offensive weapon. Travis Kelce was a non-factor in Week 1 and Michael Thomas was unheard from most of Week 2. This week Hopkins will be in the spotlight and when you combine the Patriots’ defensive method with the success rookie QBs have had in New England in recent years (hint: they haven’t won a game), Hopkins will be running sprints most of the day without touching the ball.

The Jaguars offense may be horrible, but their defense is no joke. It’s held up pretty well through the first two weeks, specifically because it’s cornerbacks. The Ravens passing game has been slugging through two weeks and should continue to be against two of the best young corners in the league. Regardless of who he lines up against, A.J. Bouye or Jalen Ramsey should shut him down.

Walker has been reasonably productive through the first two weeks of the season. Whether that be because of his history with Marcus Mariota now that there are plenty of new receivers around him or something else, it’s been positive for Walker owners. Things will be less positive on Sundaybecause Seattle’s always been one of the strongest defenses against TEs. With linebackers and safeties who can defend the position, the Seahawks will likely limit Walker’s production. It’s hard to bench Walker in season long unless you have a great bench option, but you certainly want to avoid him in DFS.