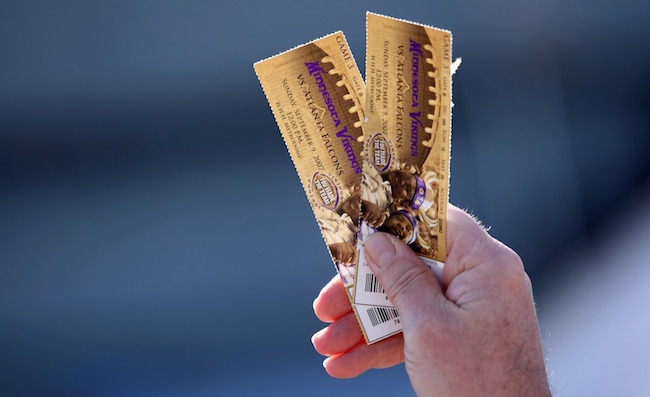 On Sunday, Tom Brady will try to get one step closer to needing to use two hands to show off all of his Super Bowl rings when the New England Patriots face off against the Jacksonville Jaguars, who will rely on the arm of Blake Bortles and the advice of a bunch of first graders to pull off the upset. The game will be followed by a matchup between the Philadephia Eagles and the Minnesota Vikings, who are looking to become the first team to ever compete for the Lombardi Trophy on their home turf.

Millions of fans around the country will be glued to their couch for seven hours, but if you want to make the trek to Foxborough or risk getting caught in the mayhem if Philly turns into The City of Not So Brotherly Love, you’re going to have to shell out some serious cash.

According to Ticket IQ, people looking to attend the game between the Vikings and the Eagles will be paying more money to get through the gates than any other conference champion game in the history of the NFL. On Friday morning, the average price to gain entry was $1,280 with the least expensive ticket going for $763.

Prices for the contest between the Pats and the Jags will also set you back more than any previous AFC Championship Game, boasting an average cost of $1,102 with the lowest priced ticket selling for $790.

However, these prices seem downright reasonable when you compare them to those for Super Bowl LII, as anyone hoping to travel to Minneapolis will have to fork over a minimum of $4,080 to get into U.S. Bank Stadium.

Rich people have all the fun.