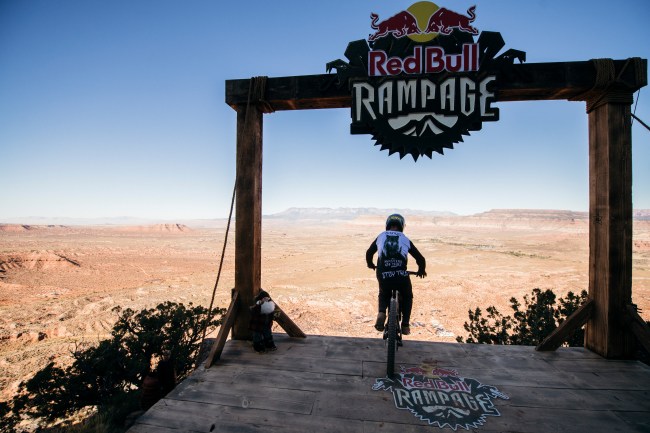 I got back home on Saturday and was fortunate enough to travel to Virgin, Utah with Red Bull Bike this year for the 2019 Red Bull Rampage. As I’ve previously mentioned here on BroBible, the Red Bull Rampage is unlike anything else in the world of extreme sports.

As far as extreme Downhill Mountain Biking goes, this is the only event. It’s the one that riders have a full year to prep for and then when they arrive, the rider and his team of two friends have a week to shovel and build out their own lines down the mountain. This includes building out the jumps and completely mapping out the route they’ll take down the mountain with all 21 riders taking different routes.

Canadian riders DOMINATED the 2019 Red Bull Rampage with riders from the Great White North™ taking all three spots on the podium. Rider’s scores are calculated based on the difficulty of the routes they choose, the tricks they pull off, style, execution, and speed down the mountain.

Tom van Steenbergen finished 3rd with 89.66 points, Brett Rheeder finished in second with a run score of 91.00 points, and Canada’s Brandon Semenuk became a 3-time Red Bull Rampage winner when he took home this year’s even with a score of 92.33. The top competitor from the USA was Tyler McCaul who finished in 5th place with a score of 87.00.

Several of the riders in the 2019 Red Bull Rampage were strapped up with GoPro cameras so the fans could see the full POV footage of what it’s like to ride down the mountain. Here’s the helmet camera footage from rider Carson Storch’s charge down the mountain:

I’ll have a full recap of the 2019 Red Bull Rampage up later today or tomorrow but I wanted to get these insane videos in front of you gentlemen this morning because I watched these when I woke up this morning and even though I was standing on that mountain while the riders were bombing downhill it’s so cool to see it from their perspective.