These 45 Seconds Of A H.S. Football Game Was The Craziest Series Of Events I’ve Ever Seen 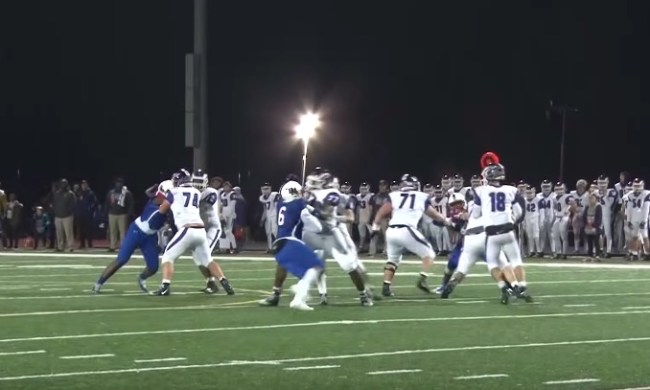 I’ll be honest and admit that I’m not quite as tapped into the 2018-2019 football seasons on the same level that I usually am. Aside from gambling, I don’t have a lot of fun watching CFB this year because my alma mater Florida State Seminoles are absolutely atrocious this season and they’ve been hard to watch at times.

This year would probably be different for me if I lived in a state where sports gambling was legal but Florida’s behind the times and there’s no plan to bring sports books to the Sunshine State in the foreseeable future. Even if I was gambling on games last weekend instead of at a wedding (like I actually was) I’m not sure I would’ve thrown $$$ on the WCAC championship game.

The game took place between Gonzaga and DeMatha, two rival Catholic schools in the Washington D.C. area. The final 45-seconds of this game is probably the most action-packed finish you’ll ever see in football.

What happened? It starts with Gonzaga converting a 3rd-and-33 to keep their drive alive while the team trailed by 3 points with 45-seconds left on the clock. Gonzaga then scores a TD with 29 seconds on the clock to take the lead.

What happens next? Rival DeMatha runs the kickoff back for a touchdown and immediately retakes the lead. Game over, right? Nope. Gonzaga’s QB throws a 65-yard Hail Mary pass to win the game as time expires. Truly, this might be the most exciting 45-seconds of football you’ll ever see.

You have to feel for the DeMatha offense and special teams. They put up 43 points in the game and even ran a kickoff back for a TD with seconds left on the clock. The defense couldn’t break up a freakish 65-yard Hail Mary as time expired and the offense was left on the sidelines watching their rival celebrate the win. That hurts.