REPORT: 49ers Will Trade Garoppolo For This QB Only 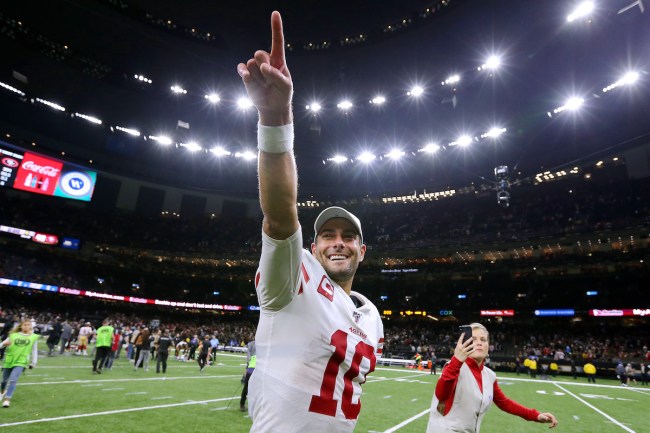 Before the season ended, many NFL insiders speculated that Jimmy Garoppolo had taken his final snap in a San Fransico 49ers uniform.

A few months later and the team is likely sticking with the injury-prone quarterback for a while unless one other quarterback becomes available via trade.

ESPN reporter Jeremy Fowler said on the Sunday edition of “SportsCenter” that the 49ers “still believe in Garoppolo” but would be willing to trade the star if the Texans reopened discussion dealing with disgruntled quarterback Deshaun Watson.

“I’m told San Fran is looking at potential upgrades, but they still like Jimmy G. He’s 24-9 as a starter, including the playoffs, with the Niners.

They believe they can win with him, but it would take a big swing, like a Deshaun Watson effect here, to make that change. And I’m told that the 49ers are one of the teams that Watson’s at least intrigued by.

A source said, ‘Which quarterback wouldn’t want to be in that offense on that team with all those weapons and Kyle Shanahan?’ So always a possibility, but the Texans have made clear they’re not willing to deal Watson right now.

Watson going to the 49ers isn’t a stretch. San Francisco is one of two teams Watson is “intrigued by.”

Garoppolo missed 10 games last season due to injury. During his injury-shortened campaign, he threw for 1,096 yards and seven touchdowns with five interceptions.

The season prior, the Niners made the Super Bowl with Garoppolo under center. The team is 24-9 with him as the starter, including the playoffs.