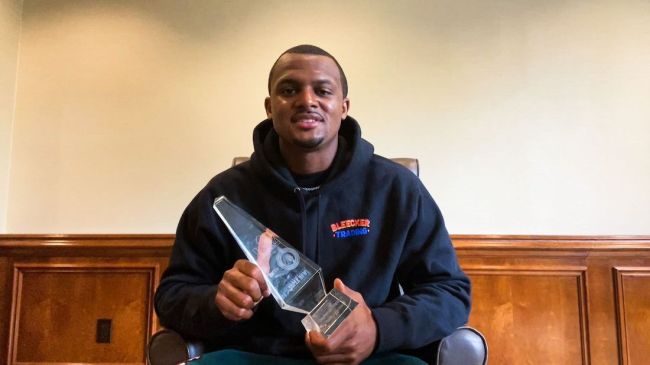 While things are stagnant on that front, that doesn’t mean people aren’t still talking about a potential deal going down at some point. Sure, Texans management is denying any interest in shipping a superstar like Watson out of town, but the signal-caller is also reportedly ready to play hardball, and is allegedly willing to sit out parts of training camp or all of next season if he doesn’t get his wish to be traded. Overall, this is all such a mess.

After seeing the Texans straight up release franchise cornerstone J.J. Watt on Friday, here’s a hunch that Deshaun Watson is only more upset with the direction of this organization. It’s almost as if the team’s just trolling their star right now, trying to make a point or something. That’s legit not happening, but it makes you wonder if the team’s like, “sorry, you signed a mega extension in 2020, so, yeah, you’re stuck with us regardless of what you think about the future of the team.”

Nobody knows how this pathetic saga will end, but something tells me Watson will force his way out. Let’s face it, he has the leverage, and if he sits out until and gets fined for doing so, it’s worth it to him if he ends up getting what he wants. Welcome to the world of the modern superstar athlete.

So where on earth would the quarterback be interested in being traded? Teams like the New York Jets and Miami Dolphins have been linked to him, but, per ESPN insider Jeremy Fowler, there are at least two teams he knows Deshaun Watson is “intrigued” by. Here’s what Fowler had to say on Get Up Friday morning.

“Deshaun Watson has a list of teams he’s ‘intrigued by.’ He’s not pigeonholing, but he’s got a list. I didn’t get all the teams, but I was told that the Denver Broncos, San Francisco 49ers are two of them.

“I also asked a source about Jets and Dolphins because they have the most draft capital over the next two years. I was told the Jets, ‘eh probably not.’ Maybe more so the Dolphins.”

“It’s all about the Texans, and they continue to believe them, that they are not going to trade Deshaun Watson.”

"Deshaun Watson has a list of teams he's 'intrigued by' … I didn't get all the teams, but I was told that the Denver Broncos, San Francisco 49ers are two of them. … I was told the Jets, 'eh probably not.'" pic.twitter.com/8YOmTbF3zw

This report is interesting for a number of reasons.

This whole Deshaun Watson trade drama is… exhausting. The Houston Texans know there’s about a 1 percent chance the guy ever wants to play for the team again, but, instead of actively engaging in trade talks and trying to get a massive package in return to start a rebuild, they’re stubbornly thinking they can convince him to change his mind. Uh, yeah, that doesn’t seem like it’s going to happen based off of some of the reports we’ve seen this NFL offseason.

Watson has reportedly expressed so much anger with the franchise that even his own teammates allegedly support his request for a trade. That’s how bad things are right now in Houston, and the team should do the right thing and just free this man from the misery of a pathetic organization.