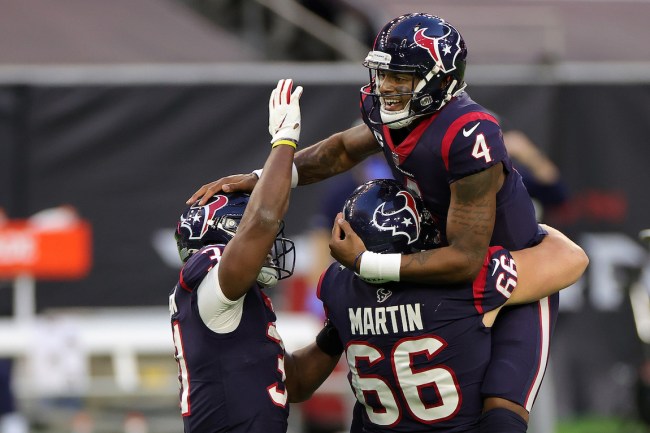 Just how bad have things gotten between Deshaun Watson and the Houston Texans? Well, depending on who you ask, things are so awkward that even the quarterback’s own, current teammates are supporting his trade request — which has been ongoing for the past month or so, with the superstar sending out cryptic tweets before reportedly asking the team to ship him out of town.

According to NBC Sports’ Peter King’s Football Morning in America column, veteran players inside the locker room are allegedly telling the Pro Bowler that he doesn’t owe them anything, and that they don’t want him to get trapped with the franchise. Take a look at what the longtime NFL writer reported on Monday.

Deshaun Watson, just 21 weeks ago, signed a contract making him the second-richest player in football history. It didn’t take two years for him to turn on his team. It took 21 weeks. It’s gotten to the point where, I’m told, even some respected veterans on the teams have, in effect, told Watson, Go ahead. Go. We love you. We don’t want you to get trapped here. You don’t owe us anything.

I’ve heard a few other things about Watson. The veterans on the team supported him going to owner Cal McNair a month ago and telling him the situation in the locker room was dire, and there was no faith in the management or direction of the team. When the team didn’t interview a Watson favorite, Robert Saleh, that turned off the locker room. When the team chose to keep EVP Jack Easterby (a major bone of contention with players, who do not trust him), that further soured the players, including Watson.

Now, I’m no expert in building team chemistry or anything, but is it pathetic to anybody else that the Texans’ new GM, Nick Caserio, and new head coach, David Culley, have already lost the locker room before the NFL offseason officially begins? Sheesh, talk about a major mess with this franchise.

After previously reaching the playoffs in four of five years prior to this season, what a major fall from grace for the Houston Texans. With Deshaun Watson playing hardball and getting support from teammates about his trade request, and those same veterans reportedly already turning their back on management and new coaches, one can only imagine how messed up things are about to get in Houston.