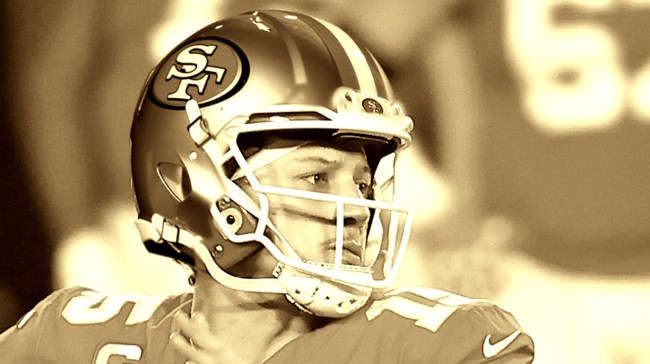 The two teams playing in Super Bowl 55 sure did make it tough to be a San Francisco 49ers fan.

What does the Tampa Bay Buccaneers playing the Kansas City Chiefs in the Super Bowl have to do with the 49ers? Glad you asked.

As we pointed out earlier this week, the MVP of Super Bowl 55 and the quarterback on the winning team (for the seventh time in his career), Tom Brady, initially would have preferred to have been playing for the 49ers this season.

Brady, a California boy who grew up a big Niners fan, was more than ready to sign with San Francisco this past offseason.

The 49ers, having already shelled out a boatload of money for quarterback Jimmy Garoppolo… passed.

Tom Brady wanted to sign with the 49ers. They passed.

But wait, it gets worse.

According to current 49ers general manager John Lynch, he thought long and hard about drafting the quarterback that was on the other side of the Super Bowl 55 field from Brady: Patrick Mahomes. And he could have.

As you may or may not recall, in 2017 San Francisco held the second overall pick that was infamously traded to the Chicago Bears so they could draft… Mitchell Trubisky.

With the third pick, the Niners selected defensive tackle Solomon Thomas out of Stanford.

In 48 games with the 49ers over four seasons, Solomon racked up a total of 95 tackles, 6 sacks, and one torn ACL. He is now a free agent.

Needless to say, Patrick Mahomes would have been a good pick that year – something Lynch knows all too well.

“That’ll probably haunt me for a while,” Lynch said on Sunday prior to the big game.

“And then calling our head coach, Kyle, and saying, ‘We might want to rethink this,’ because he put on a show.”

On the plus side, the 49ers did end up taking a quarterback in that year’s draft: C.J. Beathard, in the third round.

Seeing as how Beathard was not going to be the answer, halfway through that year, San Francisco traded for Garoppolo.

“You talk about the talent,” Lynch said. “It was a windy day in Lubbock, and I remember standing next to various NFL GMs and what-not, and everybody’s jaw was dropping because of what he was doing, throwing the ball into the wind, and finished with, like, an 80-yard throw. I mean, it was remarkable.”

Lynch added, “He’s an incredible kid. We went to dinner with him and got to share and started to see he had those other elements that we were talking about. And (he) wanted to be great.”

Oh, what could have been.