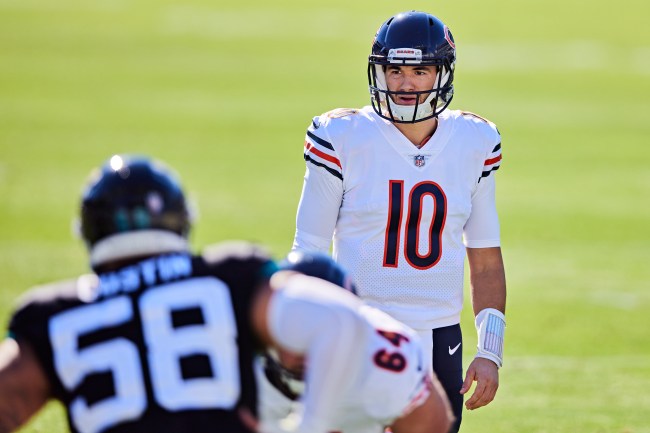 It’s been a tough four years for Mitch Trubisky in Chicago. After being drafted No. 2 overall by the Bears in the 2017 NFL Draft, the quarterback hasn’t exactly lived up to the hype usually associated with a franchise player taken in that spot. Oh, and lest we forget that Trubisky’s inconsistencies are further magnified by what other signal-callers in his draft class have accomplished — namely Patrick Mahomes and Deshaun Watson — whom the Bears idiotically refused to draft a few years ago. Talk about major regret.

Don’t get me wrong, Mitch Trubisky has had his moments, and, hell, he’s even made a Pro Bowl team and has helped lead Da Bears to the postseason in two of his four seasons. But with a career TD-INT rate of 64-37 and an average of just 2,652 passing yards per season during the same timeframe, fans in the Windy City seem to have had enough of the guy.

After seeing Chicago (once again) look pathetic offensively during a Wild Card game against the Saints in the NFL Playoffs this past weekend, Bears fans have only ratcheted up their efforts to wave goodbye to Trubisky. And when the dude actually had the gall to say he has “unfinished business” when asked about his future with the team — as he could become a free agent this offseason should the team not exercise his fifth-year option — people on Twitter absolutely lost it.

Bears QB Mitch Trubisky asked by @patrickfinley if he wants to be back: "I think I can definitely see myself back here next year. Obviously a lot of that is out of my control but it feels like home and it feels like we have unfinished business."

Just take a look below at some of the reactions NFL fans (presumably from the Chicago area), had to say after seeing the quote from the Bears quarterback.

No unfinished business. Literally none. Business is completely finished buddy. ✌🏻

Feels a lot like Cutler saying “Phil has a plan”

The Bears have unfinished business…finding themselves a franchise QB

No leave never come back

Didn't he say that after the last 3 seasons

He won the NVP what else could he have to prove?

Uh, yeah, I don’t think too many Bears fans feel the same way as Mitch Trubisky does when it comes to running things back again next season. The quarterback might think he’s got something to prove (again) with the team, but after Chicago’s latest exit in the NFL Playoffs, it seems as if there’s nothing the 26-year-old can do to win back support. Sad.

Whether it’s fans mocking Trubisky on Twitter for his comments here, or somebody actually updating his Wikipedia page to savagely recognize the quarterback earning the Nickelodeon MVP Award during the Bears-Saints postseason contest, there just seems like the dude has become the butt of jokes everywhere in Chicago. Maybe a change of scenery will serve him well this NFL offseason, because his time with the Chicago Bears appears to have hit a dead end.