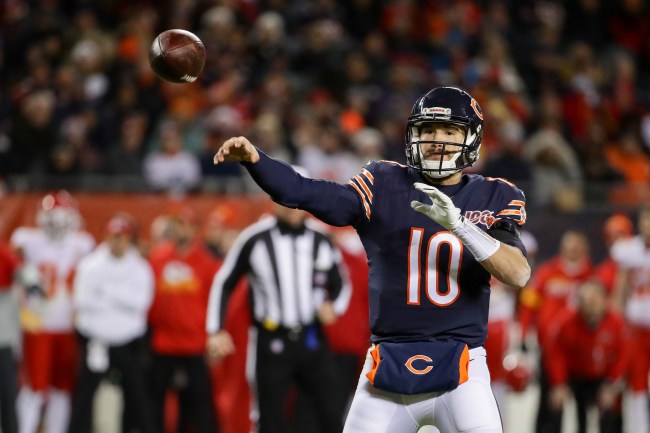 Mitch Trubisky has been the starting quarterback for the Chicago Bears for a whole three seasons and the entire city has seemingly already given up on him. That was evident last season when fans in Soldier Field were booing the 2017 No. 2 overall pick, and, if that wasn’t bad enough, the organization seems to be losing faith in him as well, having gone out and acquiring former Super Bowl MVP Nick Foles to compete for the starting gig next year. Remember, this dude was chosen over Patrick Mahomes in his draft class.

Just when you thought things couldn’t get worse for Mitch Trubisky, a few smartass people had to remind the guy that, yeah, he’s not welcome to be the Bears quarterback.

That seemed to be the sign sent by a Chicago restaurant called Chipmunks, which posted a reminder that safe social distancing should be about 10 feet from one another — or, to better describe it to Bears fans, the distance between where a Bears receiver is and where Trubisky throws the ball. Yikes, what a burn.

Using the word savage here doesn’t seem to do this justice, because this is a next level beating that Mitch Trubisky’s taking. As if the seriousness of the ongoing pandemic isn’t enough to get the quarterback down, a place called Chipmunks goes out and makes him the butt of the joke (while still being informative) about practicing safe social distancing. Anyone know the extent of Trubisky’s injuries after he sees this?

As you might imagine, people on Twitter loved the burn from the restaurant, so take a look at some of what social media had to say.

This is a murder

If it was the actual distance between a Mitch pass & its intended target, you would be more than social distancing levels apart. 😂

Although the Bears and their fanbase haven’t been too thrilled with Mitch Trubisky’s three-year performance thus far, he does have a decent 23-18 record as a starting quarterback, which included a playoff berth during the 2019 season. With Foles in the locker room to push him, though, it’s sort of put up or shut up at this point — because the message seems to be clear from fans; he’s not the answer under center.