Young Bears Fan Declares Mitch Trubisky As His Favorite Player, Gets Booed By An Arena Full Of Grown Men 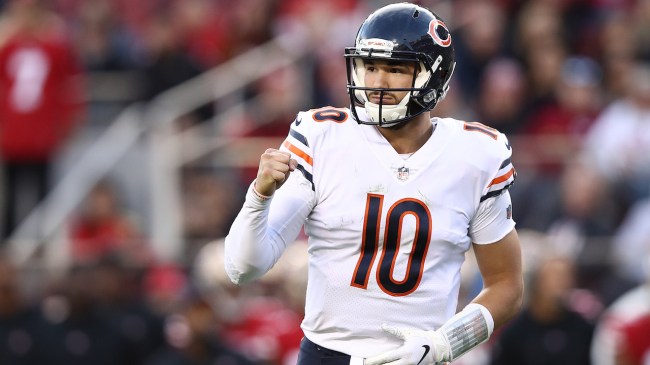 Look, Chicago Bears fans — I get it.

I’m a New York Jets fan, so trust me when I say that I know a thing or two about soul-crushingly incompetent quarterback play. It can make fruit lose its taste and the sun lose its shine. It makes Sundays dreadful and Monday mornings even worse. It can feel like an Acme anvil is latched onto your soul.

And currently, the city of Chicago is going through this very phenomenon… again.

Sitting at 3-3 — good for third in the loaded NFC North — the Chicago Bears are in the third year of the Mitch Trubisky experiment and it appears they’ve had enough.

While anyone with a functioning set of eyeballs was able to see Trubisky’s flaws when he was coming out of the University of North Carolina, the Bears fell in absolute love with him, as they not only drafted him, but they traded up to get him and passed on Patrick Mahomes and Deshaun Watson in the process. Yikes.

Now, just three years into his career, the wheels have apparently completely fallen off Bears fans’ faith as the mere mention of the third-year quarterback is now eliciting arena-wide boos.

For example, during Tuesday night’s Chicago Blackhawks against the Las Vegas Golden Nights, a young Chicago sports fan was asked during intermission who he was going to be for Halloween. His answer? His favorite Chicago Bear, Mitch Trubisky, of course.

It goes without saying that the response from the crowd was less than stellar.

Kid got interviewed over the PA during intermission.

"Who's your favorite Blackhawk?"

Kid: "Jonathan Toews. Because he's the captain and he's good."

"What are you going to be for Halloween?