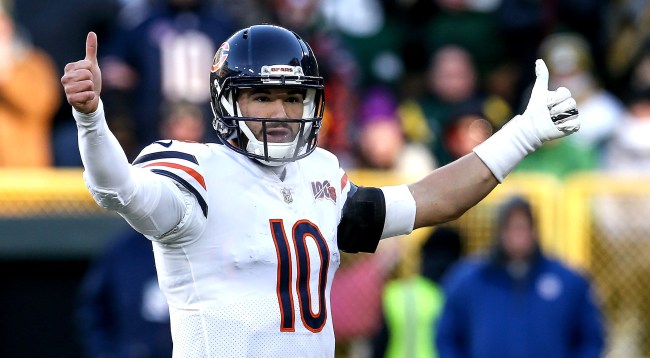 Sadly, for him, about the only way Mitch Trubisky is going to make Chicago Bears fans happy is if he wins the Super Bowl. Full stop. Nothing else he does is going to be good enough.

Being taken in the 2017 NFL Draft ahead of quarterbacks like DeShaun Watson and Patrick Mahomes by the Bears is something that Trubisky is constantly reminded of by fans in Chicago (and by Watson and Mahomes).

Even Bears wide receivers were calling for the team to sign Cam Newton or Teddy Bridgewater this past offseason.

Instead, the Bears went and signed Nick Foles, much to the dismay of the team’s fans.

On Friday, Trubisky spoke to the media and addressed the situation he now finds himself in with Foles as his competition.

“It was kind of interesting to me, but that’s the business that we’re in,” Trubisky said, according to NFL.com. “I was kind of pissed off in a good way. I’ve been motivated since our season ended last year. I didn’t feel like it went the way we wanted it to. We left a lot out there. But I’m excited for this year. I feel like it’s going to be a good competition. Foles has had a crazy career, as well, so it’s been cool having him in our room, talking ball. I know we’re going to push each other but I still feel like this is my team.

“I’m excited for the competition and just getting on the field with my guys and showing everybody what I can still do and how hard I’ve been working this offseason to help the Bears win games this season.”

Yeah that Tribusky is a real bum.

Obviously, the team’s social media manager was agreeing that “Tribusky” is a bum, not their rookie QB at the time Trubisky.

That doesn’t mean NFL, and Bears, fans didn’t find it amusing as hell though. Because of course they did.

You all sure did predict that one.

He not wrong tho 👀

Glad to see that you agree

Then again, regardless of whether Trubisky was picked in the 2017 NFL Draft, even if it was behind Mahomes and Watson, he was always going to have issues in Chicago after they found a tweet of his from 2015 that read (and has since been deleted), “Hell yeah, Go Packers.”

Do you ever think about how the Bears could’ve had Patrick Mahomes or Deshaun Watson, but instead traded up to draft Mitch Trubisky?

It will never end for him.