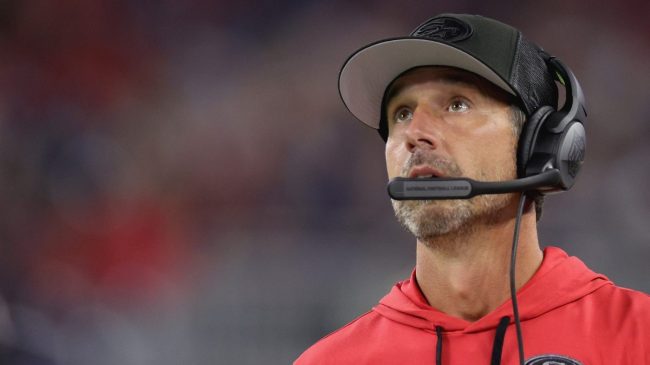 There has been plenty of speculation regarding Tom Brady since he left the New England Patriots. We all know the different speculations of different teams Brady nearly played for. However, the latest rumors might make San Francisco 49ers fans sick, as their head coach was interested in signing Brady back in 2020. However, something happened that prevented Kyle Shanahan from pulling the trigger.

That’s right. Apparently, the 49ers talked Shanahan out of signing Brady back in 2020 when he was a free agent, per Dov Kleiman. It sure sounds like Tom Brady spoke with nearly every franchise throughout the last two years after leaving the Patriots. Regardless, this has to feel like a gut punch to the fanbase.

During the 2020 free-agency, Kyle Shanahan wanted the #49ers to sign then free-agent QB Tom Brady.

But Shanahan was eventually talked out of it by others in the building, @mlbomraito told @PatMcAfeeShow

Brady grew up a 49ers. pic.twitter.com/1FCLKFddyX

The 49ers’ head coach has generated a rather strong performance in recent years. They made a Super Bowl appearance in the 2019-2020 season. Then failed to make the playoffs the following year. However, you have to imagine San Francisco would have been much more competitive with Tom Brady under center.

Additionally, the franchise came one game shy of making another Super Bowl appearance in the 2021-22 season. Had Tom Brady been leading the way, the 49ers could have been hoisting the trophy at least once in these last three years. Instead, they stuck with Jimmy Garoppolo and ended up drafting Trey Lance.

Hopefully, Lance is the stud the franchise thinks he is. Otherwise, San Francisco is going to be kicking themselves for passing on Tom Brady when he was available. Look for Kyle Shanahan to do everything possible to keep his squad competitive. If he can do that, then these 49ers’ rumors won’t be as much of a gut punch as they already are.