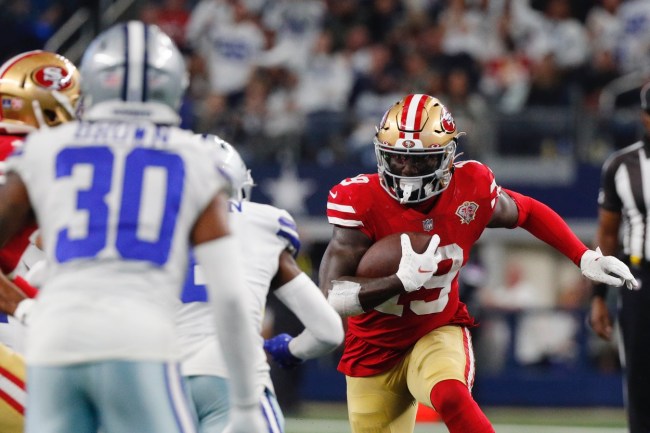 The San Francisco 49ers have a number of question marks this offseason.

First and foremost is at the quarterback position, where the future of signal caller Jimmy Garoppolo hangs in the balance. Will San Francisco look to move on from the passer who recently led them to the NFC Championship, or will they stick with him as he heals from offseason shoulder surgery?

While Garoppolo’s status remains up in the air, a pair of the 49ers’ talented playmakers now know their standing with the organization.

DE Nick Bosa and WR Deebo Samuel were two names that began popping up in offseason trade talks. Samuel, in particular, had been linked to the New York Jets as recent as last week.

On Tuesday, General Manager John Lynch made a statement on the two All-Pro performers.

Lynch says that neither Bosa or Samuel are on the trade market this offseason. Instead, the GM states that there’s been good communication in regard to contract extensions. Lynch says, “Those guys are gonna be a part of us for a long, long time.”

#49ers GM stated that there's been "good communication" with the reps for both Deebo Samule and Nick Bosa in regard to their contract extensions.

Lynch stated: "Those guys are gonna be a part of us for a long, long time."

That’s encouraging to hear if you’re a 49ers fan. Head coach Kyle Shanahan has backed this sentiment, saying that he’d recommend extending Samuel if it were up to him.

Kyle Shanahan was asked how involved he’ll be in a Deebo Samuel extension: “I recommend it.” https://t.co/kGbvnIMk9i

Should these players get deals done this offseason, it would solidify key pieces on both sides of the ball. These recent reports insist that San Francisco will do so sooner rather than later.