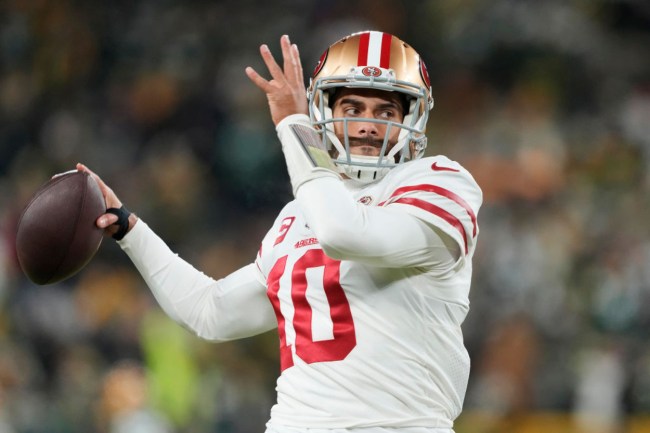 While there’s still plenty of time for a trade scenario to present itself, the Jimmy Garoppolo trade talk has been extremely quiet this offseason.

Several teams have already made big-time moves for new quarterbacks this offseason and the list of teams in need, and possibly willing, to trade for Jimmy G is shrinking.

As it stands right now, Garoppolo is signed through the end of the 2022 season and set to make $24.2 million. That’s a number the 49ers – and presumably every other team around the league – doesn’t want to pay.

The easiest fix could be San Francisco simply cutting the QB, but general manager John Lynch has ruled that option out.

Jimmy Garoppolo Could Be A 49er Next Season

San Francisco has made it clear that it wants to start Trey Lance under center next season. However, there is a scenario that could see Garoppolo return and compete with Lance for the QB1 spot.

“My understanding is, there is certainly a scenario, and perhaps one that grows by the day, in which Jimmy Garoppolo could potentially be in a situation where he competes with the 49ers,” NFL Network’s Tom Pelissero explained.

“On his current contract, maybe on an adjusted contract, he comes back and competes with Trey Lance.”

Most 49ers fans probably don’t love the idea of Garoppolo returning and carrying a sizable cap hit to quite possibly be the backup quarterback. Having said that, the reality right now is that a Jimmy G return to San Fran for next season is on the table.