50 Amazing Facts About Brett Favre, Plus His 50 Greatest Plays, For His 50th Birthday 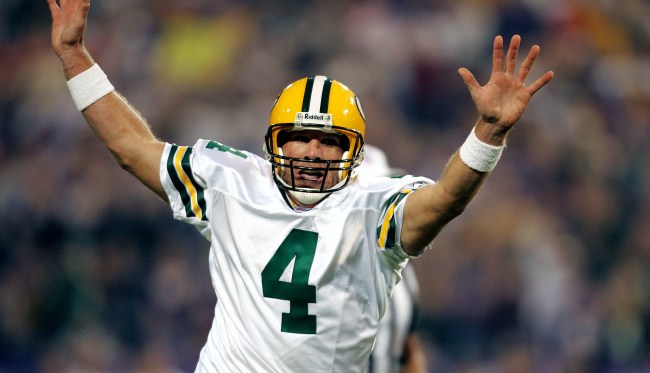 Living in Illinois for most of my life I was no stranger to the many exploits, both on as well as off the field, of the gunslinger from Kiln, Missisippi, Brett Favre.

Even as a fan of the Green Bay Packers’ bitter rivals the Chicago Bears I couldn’t help but absolutely love the guy and the way he played the game.

Favre just had something about him that was infectious every time he stepped onto a football field in the NFL. In a way, he was like the Michael Jordan and Barry Bonds (bear with me) of the NFL – as in, when he was out there you didn’t dare head to the kitchen or to the bathroom for fear of missing something amazing and/or ridiculous happening.

So, to celebrate Brett Favre turning 50-years-old this October 10th, we present 50 facts about the legendary gunslinger as well as a look at his 50 greatest plays.

1. Favre was selected in the second round of the 1991 NFL Draft by the Falcons.
2. He threw a grand total of four passes in two games for the Falcons.
3. He didn’t complete any of those four passes.
4. Two of them were picked off.
5. He was traded to the Packers for the 19th pick in the 1992 NFL Draft.
6. He started a NFL record 321 consecutive games (including the playoffs).
7. 238 other quarterbacks started a game in the NFL during his streak.
8. 12 quarterbacks who were back-ups to Favre started games for other teams during the streak.
9. At the time of his retirement, he owned or shared 402 NFL records.
10. His home record against the Detroit Lions was 18-0 (20-0 if you count the playoffs).

21. 31 of those interceptions were returned for touchdowns – also a record.
22. He is tied for the most games played by a quarterback on Monday night (38 with Dan Marino).
23. In the calendar year of 1994, Favre played the Detroit Lions five times, going 3-2.
24. Favre won a record 11 straight road games versus the Chicago Bears.
25. He led his team to a record 23 fourth quarter/overtime comeback wins.
26. He once won 29 straight games at home.
27. He was a record 43-9 (.827) in games that were 34 degrees or colder.
28. Favre also lost a record seven times on the road in the postseason.
29. He holds the record for longest gap between receptions (17 years, 4 weeks).
30. Favre was the first quarterback to defeat all 32 teams in the NFL.

31. Favre also holds the record for most times sacked in a career with 525.
32. He also holds the record for most fumbles in a career with 166.
33. Favre is tied with Joe Namath for most TD passes in a game (6) by a Jet.
34. He also holds the New York Jets record for pass completions in a season.
35. His longest completion was 99 yards to Robert Brooks on September 11, 1995
36. He is one of only six quarterbacks to win NFL MVP and Super Bowl MVP in the same season.
37. The pick Atlanta got for trading Favre ended up being used on running back Tony Smith.
38. After the trade, Favre was diagnosed with the same hip condition that ended Bo Jackson’s football career.
39. On his first play as a Packer, Favre threw a pass that he ended up catching himself.
40. Favre fumbled four times in the next game.